Along with Stillwater (USA), Choco is the world's only significant primary platinum-producing district outside of South Africa, Russia and Zimbabwe. Choco was the world's sixth-largest source of platinum in 2012 (United States Geological Survey, 2013).

The Choco region is the leading producer of precious metals in Colombia. Small-scale operations in the municipality of Novita and the surrounding communities of Condoto, Tado and Sipi produced 15,317 ounces platinum and 278,702 ounces gold in 2011,

Gold and platinum is produced in Choco by rudimentary methods, mainly hydraulic concentration. Condoto Platinum is installing the first modern production equipment in the region. The operation consists of simple Knelson concentrators and Gemini tables, aimed at significantly increasing recoveries of precious metals. The company is also exploring to locate the elusive source rocks for the prolific Choco deposits.

Condoto Platinum is headed by experienced exploration, production, finance, and platinum professionals with a successful operating history in Colombia.

Condoto Platinum signed an agreement on January 31, 2012 covering 105,975 hectares surrounding the town of Novita. The town is located in Choco Department, western Colombia—approximately 85 kilometres south of Quibdo, the capital of Choco, and 200 kilometres southwest of the city of Medellin. The project lies approximately 80 kilometres east of the Pacific Ocean.

The lands under agreement belong to the Novita Higher Community Council (“the Novita Council”), who hold preferential rights on mining concessions here, under the Colombian constitution. Local miners here produce exceptional amounts of gold and platinum from small-scale workings—production from Novita, Condoto, Tado and Sipi municipalities totaled 15,317 ounces platinum and 278,702 ounces gold in the fiscal year 2011.

Condoto Platinum is now exclusively exploring this area under a royalty arrangement with the Novita Council.

The company’s primary operations are currently based at the Martinez Mine, adjacent to the town of Novita. The Martinez Mine is producing substantial amounts of gold and platinum using rudimentary mining and processing methods, selling these metals to smelters in the city of Medellin. Condoto Platinum is installing modern processing equipment at the Martinez Mine including Knelson concentrators and Gemini tables, aimed at 1) quantifying production and recovery rates here, and 2) significantly increasing recoveries of platinum and gold. Condoto Platinum’s Martinez Mine agreement calls for the company to receive 100% of platinum production and 25% of all gold production.

The source of the widespread platinum and gold deposits in the Novita area has never been discovered. Condoto Platinum is conducting regional exploration to locate high-grade deposits within the 105,975 hectares under agreement. In 1897, mining engineer and adventurer Robert White described such deposits in the Novita area. He reported that grades for surface conglomerates averaged “1 oz per ton, of which half was gold and half platinum” (Engineering & Mining Journal; February 20, 1897).

The company’s regional exploration has focused on the Cerro Esperanza target. This mountain is located 25 kilometres east of the town of Novita. The mountain’s flanks host numerous small-scale mining operations. Condoto Platinum is working to locate the source of this mineralisation, above areas of local mining.

Additional sampling and geological mapping is being conducted in areas of high assay values to locate potential sources of mineralisation. 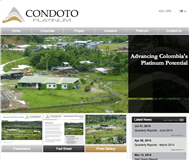 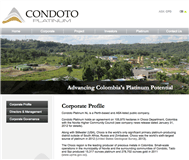 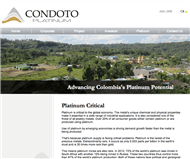 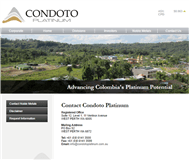 The General Overview, Services, Products and Projects information for this profile was last edited on 21 Jun 2016.