Elysium Resources Limited, with its tenements located in the rich mineral provinces of Australia and Indonesia, is focused on its core business of exploring for large, high quality copper and gold deposits. The Company's aim is to increase shareholder wealth through capital growth and dividends, by advancing projects from exploration through to development and into profitable operating mines.

Consists of approximately 84 square kilometres (28 units) and has within its boundaries the village of Burraga, which is a short distance from the Lloyd's Copper Mine. The Lucky Draw Gold Mine is located in the north-east sector of the tenement.

The Lloyds Copper Mine produced 19,443 tons of Copper from 469,626 tons of ore implying a recovered grade of 4.14% Cu, between 1880 and 1920, then intermittently up to 1961. The initial focus for copper exploration is the confirmation of extensions to the original Lloyds Mine ore body.

Burraga Copper Mine production table from 1880 to 1972

As a result of mining at the Lloyds Mine, and to a lessor extent at nearby mines, there now exists a tailings dump and two slag dumps of up to 350 Kt. The tailings resource contains a drill proven 234Kt @ 1.2% Cu. Metallurgical testing of the tailings confirms a greater than 70% recovery rate from processing of the tailings. The scoping study commissioned assesses the commercial potential of reprocessing the tailings, slag and minor hard rock resources from the surface of Lloyds Mine, and concludes that such a project, subject to further testing and financial investigation, is financially and commercially viable with start-up capital expenditure estimated at $10.8 million, generating a net profit of $75 million over 4.4 years of operation.

The main gold mining production, within EL6463 occurred at the Lucky Draw Gold Mine discovered by Renison Goldfields Consolidated Ltd in 1980 where it mined 1.41 million tonnes of ore at an average grade of 4.2 g/t Gold in the early 1990's.

Further assessment will be undertaken of the un-mined portion of the Lucky Draw Gold Mine as well as the Hackney's Creek Project. The Company is targeting >500,000 Au ounces at these two locations and repeats of similar style mineralisation elsewhere on the Burraga Granite perimeter.

Consists of approximately 24 square kilometres (8 units) and is located to the east of EL6463. The geological setting of EL6874 is characterised by the Burraga Granite and Rockley Volcanics. Preliminary geophysics and surface geochemistry sampling on the Burraga Granite contact is planned to establish drill-ready targets for Lucky Draw style mineralisation.

Consists of approximately 75 square kilometres (25 units) and is located to the east of EL6874. The western portion of EL7975 covers the eastern portion of the Burraga Granite and Rockley Volcanic intrusions. Preliminary geophysics and surface geochemistry sampling on the Burraga Granite contact is planned to establish drill-ready targets for Lucky Draw style mineralisation.

The Company has agreed terms with Gata Sumbar Daya in Indonesia to explore the Malang project in East Java, some 60km to the south-east of the city of Malang.

This tenement is 5.5km2 and lies 4km to the south of the Horseshoe Lights Mine in Western Australia which is a VMS style high grade copper ore body. Over the past several years, Horseshoe Metals Ltd (ASX:HOR) has been delineating extensions to the south plunging ore-body with a consistent flow of encouraging results to the market. As recently as May 27, 2013, HOR reported copper results as high as 10% under the existing pit.

Due to its proximity to an existing high grade copper ore-body which was an economically viable mine in the recent past and continues to provide excellent drilling results; and is in a highly prospective region which includes the impressive De Grussa mine some 60-70km to the ESE,, the Company considers this tenement a good fit to its strategy and has been active in reviewing existing information. The Company's consultant geophysicist has re-processed results from an airborne geophysics survey flown in 2011. This has been re-interpreted with earlier geophysics and surface sampling, including drilling, carried out to the west of the tenement by Sabminco in the 1980's and 90's. Sabminco best drilling results, some 200-300m west of the Company's tenement, include 9m @ 10.32 gpt Au from 19m into similar geology found in the western part of the Company's tenement.

Previous explorers' grid soil sampled most of the Company's tenement without much success. The Company has reviewed the two magnetic targets in light of all the data available. Drilling over these targets has also been undertaken previously to depths of 50-75m with no encouragement from the results. The Company's review of the magnetic data shows that the targets are 100-200m deep. A reconnaissance field visit will be used to plan a drilling program. Indications are that 3 Reverse Circulation (RC) drill-hole will be needed at a minimum to test the two targets; 1 into the north-central target and two in the larger western target. 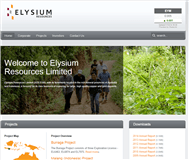 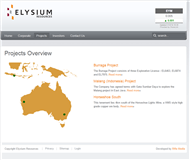 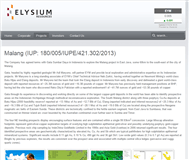