Located approximately 400 kilometres north-east of the Eastern Goldfields centre of Kalgoorlie, the Lake Wells Potash Project is being explored for the premium fertiliser mineral Sulphate of Potash (SOP), contained within the lake brines. Targeting the domestic demand from Australian farmers for this essential plant macro-nutrient, the Lake Wells Potash Project’s location, access to infrastructure, including roads, rail and air services, and the very strong potassium (K) grades returned to date, all highlight its very strong merits.

In addition to the highly prospective Lake Wells Potash Project, Goldphyre’s project portfolio comprises the gold and base metals prospective Laverton Downs and Mailman Hill projects, and the Beretta project, located in rapidly emerging base metals minerals province in the Albany Fraser Orogen. 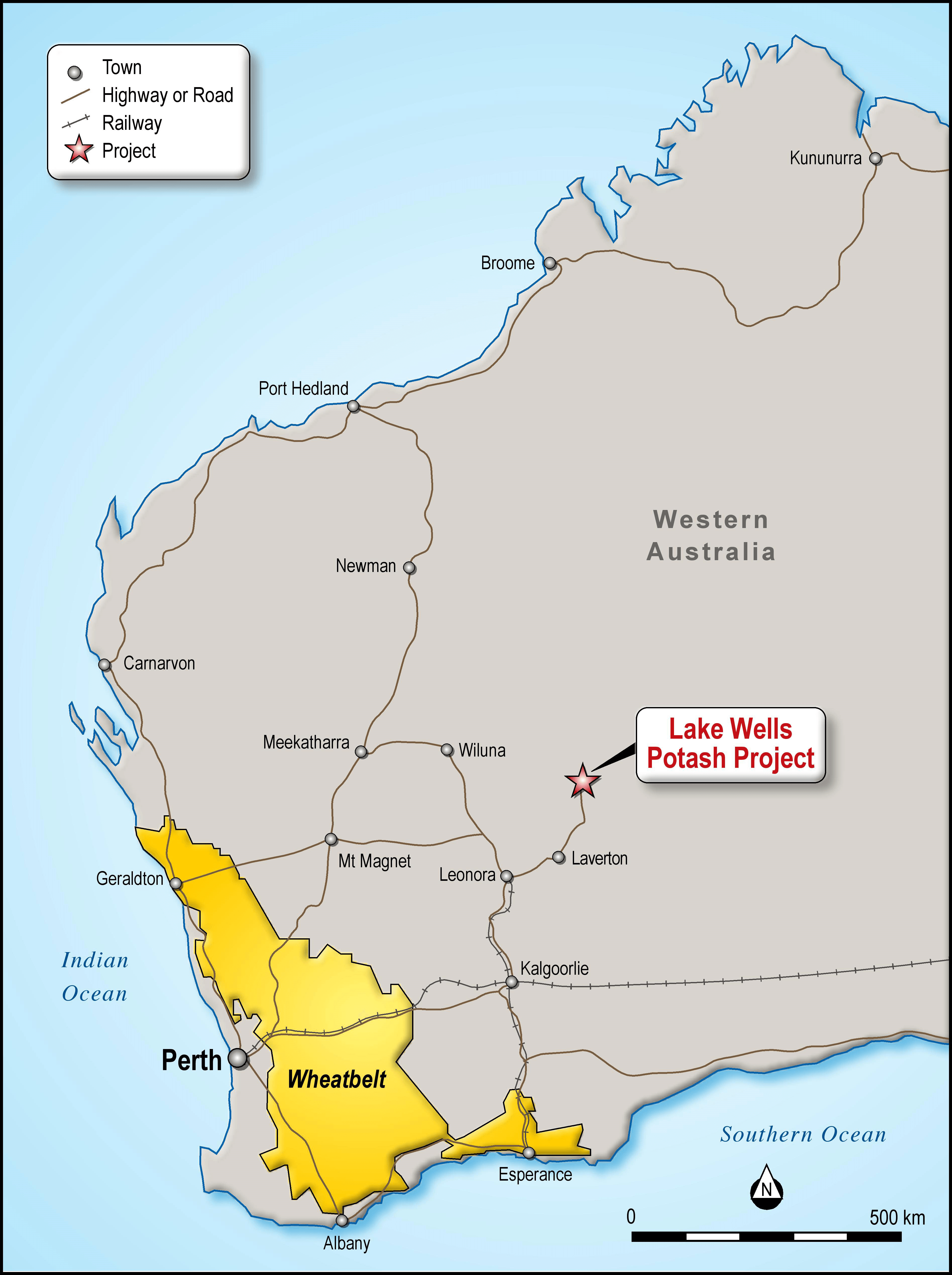 The Lake Wells Potash Project consists of a substantial tenement package securing a significant area of palaeovalley and salt lake terrain in the northeast part of the Yilgarn Craton, Western Australia. Recent pit sampling, auger and air-core (AC) drilling has demonstrated the presence of consistent high-grade potash brine concentrations to significant depths both on and adjacent to salt lakes.

The project area is accessed north of Laverton via the well maintained Great Central and Prenti Downs roads.

Historic and recent Goldphyre drilling has revealed a variable regolith horizon consisting of surficial or near surface evaporite and sand/silt, silcrete+-laterite, common lake clays with some well sorted sand units and puggy lacustrine clays with minor sand/silt. Archaean basement rocks including transitional porphyry, granite, ultramafic and amphibolite types were logged at the end of some holes. 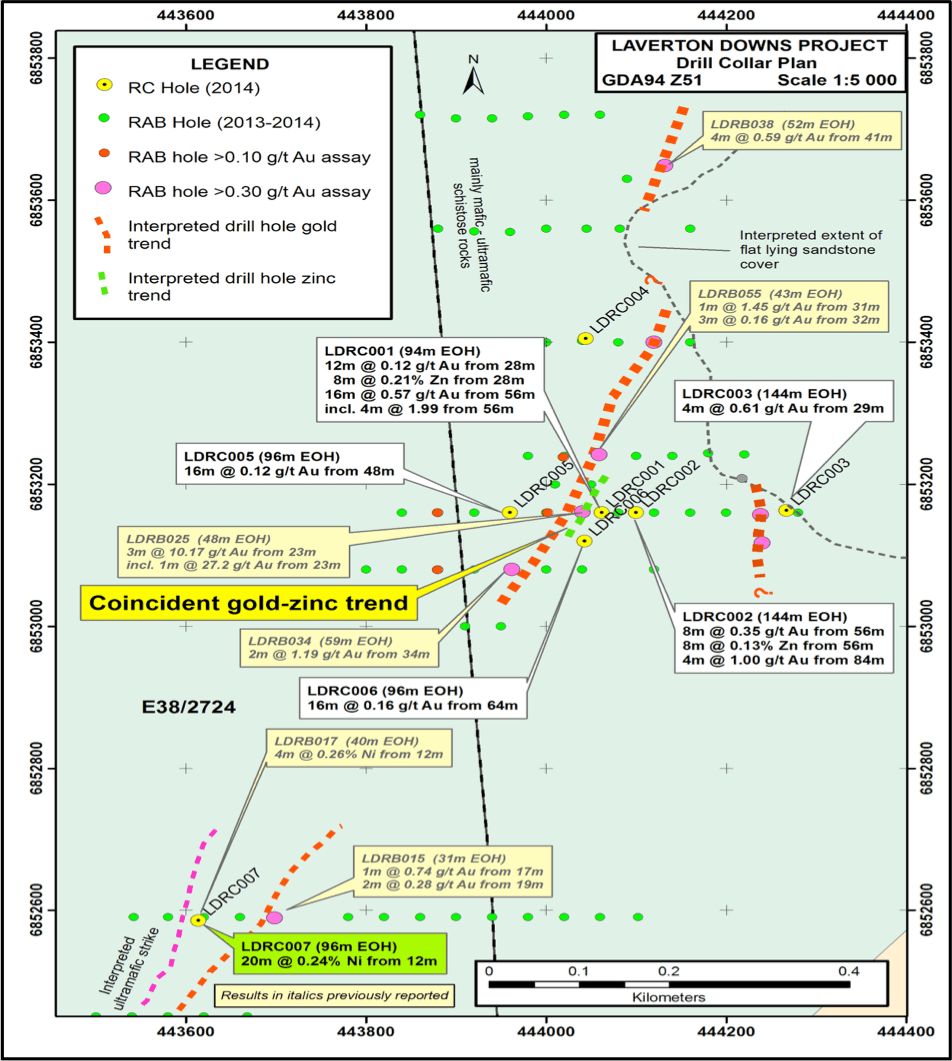 The Laverton Downs Project is located 15 kilometres north of the Laverton township, and comprises two tenements, E38/2724 and E38/3014. The project area captures the gold prospective Admiral Hill Shear on the east side and the interpreted Lancefield Mine sequence on the west side (Lancefield Gold Mine current resource 596,000 oz gold.

Outside of and away from the paleo-valley hosting the Lake Wells Potash Project, the tenements comprising the Great Central Project have been largely under explored. The Archaean geology is not well understood and in many places covered by sand deposits, discouraging past explorers. Studies carried out by the Geological Survey of WA in 2010 found that the Yamarna Belt was similar in age and characteristics to the Kalgoorlie Terrane greenstone rocks.

The Great Central Project forms the most extensive of the exploration properties and consists of a tenement package securing a significant area of deformed greenstone-granitoid in the northeast part of the Yilgarn Craton, Western Australialake_wells_map3. The Project includes a range of geological settings and has immediate drill targets prospective for gold, nickel, platinum group elements (PGE), base metals and uranium. Complex structural setting and lithology, known shallow gold and base metal drill-hole anomalies, a paucity of effective, historic exploration work and only minor Permian and Proterozoic cover make the Great Central Project compelling. 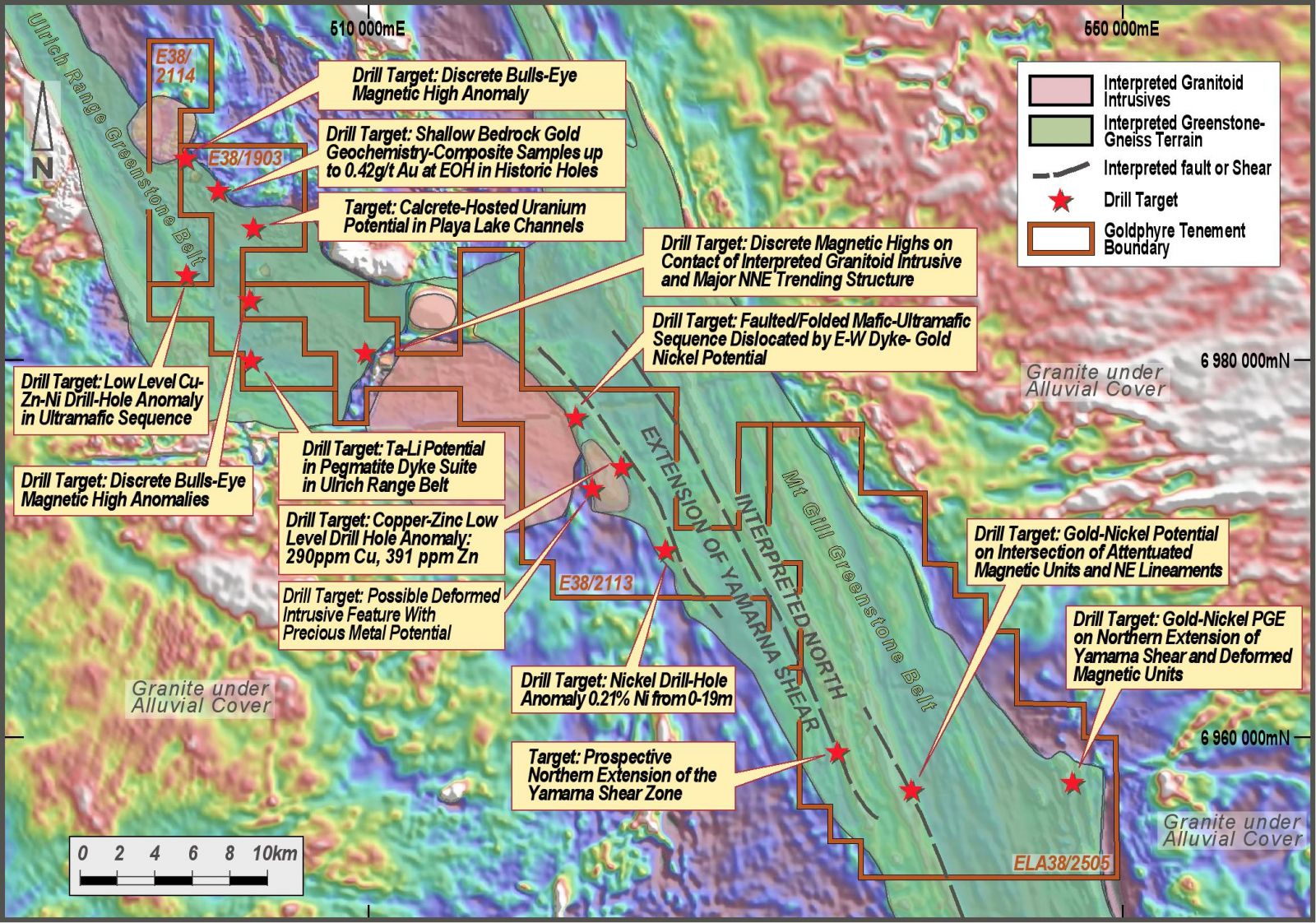 The Lake Wells Project is located on the north-eastern margin of the Yilgarn Craton, Western Australia. Recent work by Pawley et al (2009) from the Geological Survey of Western Australia (GSWA) has suggested a regional-scale fault zone, the Yamarna Fault Zone (YFZ) is a Yilgarn Craton terrane boundary situated on the western margin of the Mount Gill Greenstone Belt. The YFZ resembles other regional terrane boundaries (such as the Laverton Shear Zone) in that it is a deep-rooted structure that divides two contrasting metamorphic terranes of contrasting ages. The GSWA has also completed recent mapping (Pawley, 2010) that suggests the Yamarna Terrain has rocks of similar age and character as the fertile Kalgoorlie Terrane.

Thin, highly strained and folded WNW-NNW trending Archaean greenstone belts have been recorded in subcrop observations, previous explorers’ drill-hole data and interpreted from regional and detailed aeromagnetics and gravity surveys. Two main greenstone belts have been recognised as the Ulrich Range Greenstone Belt in the northwest part and the Mount Gill Greenstone Belt in the central and south-east parts. Metamorphic grade of the greenstone rocks are greenschist to lower amphibolite facies. These greenstone belts consist of basalt, amphibolite, gabbro and felsic schists with chert-shale-BIF units. The greenstone belts are located within large areas of granitic rocks. Limited outcrop and drill data indicates the granitoid rocks consist of quartz-feldspar granite, adamellite, diorite and gneissic granite.

The Lake Wells Project area is almost entirely covered by Quaternary aeolian (sand dune) deposits, depositional sheet wash and playa lake deposits. Remnants of transported, pisolitic laterite have been observed within the sand dune terrain on the southern and central parts of the project. The sand dunes consist of fine to medium-grained, well-sorted quartz sand. 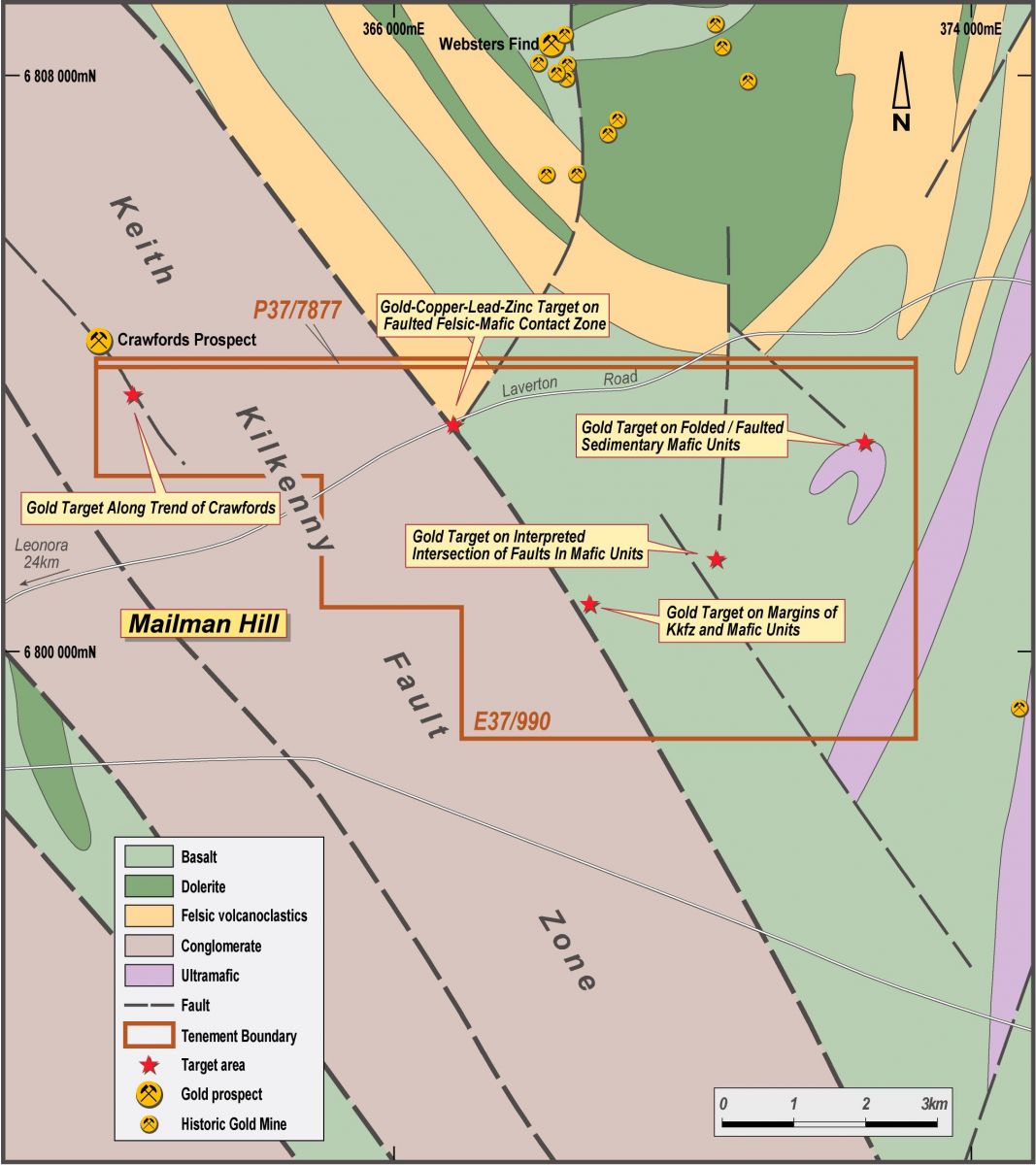 The Mailman Hill Project is located 25 km east of Leonora and the project includes a significant section of the Keith Kilkenny Fault Zone (KKFZ) and a structurally complex mafic-felsic– sedimentary package considered highly prospective for gold and base metals. The Leonora gold camp has production/resources of 8 Moz of gold.

The Mailman Hill Project is located 25 km east of Leonora and the project includes a significant section of the Keith Kilkenny Fault Zone (KKFZ).

The Project covers approximately 50 km2 and consists of granted E37/990 and P37/7877. The project area has excellent road and rail access.

Major gold mines in the region (Leonora Camp) and other significant deposits and prospects (Mertondale 1-5 and Nambi) are located to the west and north of the project.

A sequence of felsic volcanics intruded by biotite granitoids and structurally overlain by mafic-ultramafic rocks hosts the lens- shaped copper-lead-zinc deposit at Teutonic Bore, 60 kilometres to the north of Leonora. More recently, a base metal discovery is currently being mined at Jaguar.

The project captures a significant section of the Keith Kilkenny Fault Zone (KKFZ) and a structurally complex package of Archaean Murrin Greenstone Belt rocks including mafic-ultramafic and felsic-volcanosedimentary units (interpreted to be members of the Gindalbie and Mulgabbie Formations).

A series of north to northeast trending anticlines and synclines are interpreted in the eastern part of the Leonora Project. Northwest trending, fault-associated conglomerate, arkose, dacitic and rhyolitic volcanics and other sedimentary units related to the KKFZ on the western part of the Leonora Project unconformably overlie the strongly folded greenstone sequence.

Outside of and away from the paleo-valley hosting the Lake Wells Potash Project, the Lake Wells tenements have been largely under explored. Due to its remote location, the region has received little, systematic exploration. The Archaean geology is not well understood and in many places covered by sand deposits, discouraging past explorers. Studies carried out by the Geological Survey of WA (part of the Dept. of Mines and Petroleum) in 2010 found that the Yamarna Belt was similar in age and characteristics to the Kalgoorlie Terrane greenstone rocks. 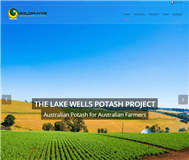 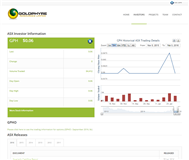 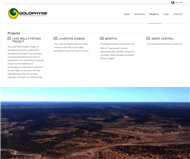 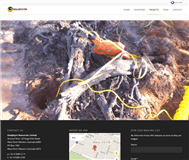