Minera Gold Limited (ASX Ticker: MIZ) is an Australian-listed international gold producer which is exploring and developing a portfolio of medium-sized gold projects in South America.

Significant potential exists to further extend the mine life at Torrecillas, with numerous additional mineralised zones identified outside the existing JORC resource area. An extensive exploration program is planned for 2012 and early 2013 with the aim of establishing a maiden resource estimate for the Torre Chico and Ady/Oly veins – both of which lie in close proximity to the Torrecillas vein currently being mined – to assess the potential for future mining.

Approval for Crista permitting was received on 17 December 2012. The JORC Probable Reserve at Crista is 174,939 tonnes @ 4.16 grams of gold per tonne for 23,414oz applying a 1g/t cut-off and US$1,250 gold price. The Reserve is limited at the Crista deposit by a lack of drilling which has only been drilled to a maximum depth of 60m in sufficient detail to be reported. There are multiple potential open pits across 711ha tenement.

Minera Gold has an experienced and focused management team with vast regional experience in the countries where it operates. This team is committed to delivering efficient asset management, proactive growth opportunity identification and strong regional knowledge to effectively drive the asset development process. 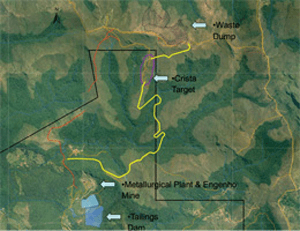 The primary asset of Mundo Mineração Limiteda (Brazil) is the Engenho Gold Project. The Engenho Gold Project is located in the State of Minas Gerais and includes various known deposits and exploration targets including Crista, Olhos and Mazorca in addition to the Engenho underground mine that is currently under care and maintenance. In addition, a 700TPD processing plant is established at this project which along with associated infrastructure cost more than $25 million to establish since 2008.

On 17 December 2012, Mundo Brazil received approval to proceed with construction and mining of the Crista open pit deposit that forms part of its Engenho Gold Project, located outside Belo Horizonte in Southern Brazil. The key approval, which was received at a meeting held on the December 17, will enable development of this important asset to proceed, providing significant impetus to the planned restructure of Mundo Brazil’s operations.

The JORC Probable Reserve at Crista is 174,939 tonnes @ 4.16g/t for 23,414oz applying a 1g/t cut-off and US$1,250 gold price. The Reserve is limited at the Crista deposit by a lack of drilling which has only been drilled to a maximum depth of 60m in sufficient detail to be reported.

All up cash costs are expected to be less than US$700 per ounce for Crista, including upfront construction costs and pre-strip, with the operation utilizing contract mining and the existing Engenho process plant which is located 1.5km south of Crista.

To date, Mundo Brazil has defined by auger drilling and surface exploration the Olhos target over a 440m strike length that is still open to the south. This strike length of Olhos is approximately twice that of the Crista deposit and from the work completed to date Olhos has substantial exploration upside potential for Mundo Brazil.

In parallel with the Crista development, it is envisaged that exploration will re-commence as a priority at the nearby Olhos and Mazorca prospects, which lie just 600m south of Crista. These targets are considered highly prospective and planning is underway for the commencement of a 12,000m RC drill program.

Comprising approximately ~13,000 hectares of tenements, the Torrecillas Project consists of a multitude of narrow vein, high-grade mineralised structures across both tenement groups.

The Company has defined approximately 6.5km of high-grade vein structures on the main tenement block, and commenced trial mining in 2009 to evaluate the resource potential of the narrow mineralised zones.

This trial mining has yielded head grades of more than 18g/t Au delivered to the mill, with in-situ vein grades ranging from 8g/t Au to in excess of 50g/t and typical mining widths range between 0.3 metres and 1.2 metres. It has also enabled Minera Gold to make an accurate assessment of mining methods, productivity, grade distribution and ground conditions.

Peruvian miners are experienced at mining these narrow veined deposits and are able to efficiently exploit the mineralisation and maintain excellent recovered grades as demonstrated through the consistency achieved through trial mining.

Based on the success of the trial mining completed to date, Minera Gold has developed a two-stage development approach to achieve commercial production. This will involve initially ramping up production from the current level of 600oz per month from mining remnant stopes to approximately 1,600oz per month by the end of 2014 at a forecast cash cost of less than US$700/oz.

The planned production in 2014 will enable Minera Gold to generate sufficient cash flow to underpin continuing exploration drilling and trial mining on the Tessie, Rebeca and Ady/Oly veins, with a view to defining sufficient resources to justify the commencement of full scale mining on those veins in 2015.

The above resource represents a 3-4 year mine life at Torrecillas based on forecast production rates.

The broader Torrecillas Project encompasses some 13,000ha of under-explored tenements containing 23 identified vein systems from within less than 10% of the concession area.

Based on the prospectivity of these targets, Minera Gold has established a conceptual Exploration Target* for the Torrecillas Project of 420-480,000t grading 15-20g/t Au for 220-250,000oz of gold.

Minera Gold’s long term target at the Torrecillas Project is to develop a high grade, multi-vein project, with production from at least three high grade vein systems by 2014.

Minera Gold has used third party toll treatment for processing of its production over the past six years. The Company, as announced in late January 2014 has secured a long term lease over the CIP circuit at the San Santiago Processing plant located at Otapara, approximately 180km from Torrecillasis. The Company is now transitioning to owner operator processing which includes the installaton of a stand alone crushing and grinding circuit for the CIP circuit, within the larger milling complex.

Treatment of ore from mining to date has confirmed that the ore is free milling and is able to be efficiently treated through normal carbon-in-leach processing.

Metallurgical testing indicates that recoveries range between 93% and 94.5%.

Minera Gold is engaged with the local community to channel funds in the most effective areas in terms of the Town of Otapara, with projects that include: the construction of a sports field, rehabilitation of the town's water storage facilities and provision of a manned nursing station. In general the Group enjoys a good relationship with the surrounding community. The marked improvement in community facilities and standard of living is a positive result of providing job opportunities and channelling funds into the local markets. The Company is a substantial employer in the region.

Following the release of the maiden exploration results from the Tumi project in July 2013, work has continued to assess the potential of the breccia hosted mineralised area that covers approximately 1.6 km2 on surface. The average grade of the 27 trench and channel samples returned 2.16 g/t Au, 0.6 g/t Ag and 0.1% Cu.

A ground based magnetic survey was completed in late December 2013 to define the potential size of the mineralized breccia target at depth and to also identify other potential anomalies and drill targets as shown below.

Results from the magnetic survey and 3D model indicated:

The Tumi breccia itself appears as a magnetic low feature in the data products and the model results, suggesting magnetite destruction/depletion in the breccia. The key conclusion drawn from the magnetics covering the breccia is that the two outcrops previously mapped in 2013 are part of the same system, which provides strong support for a larger system than previously believed.

The discovery of four additional breccia bodies provides further validity to the 3D model interpretation that Tumi has the potential to host a very large system containing a number mineralised breccia bodies and also the interpreted associated intrusive target.

An IP/resistivity survey is now being considered over the intrusive anomaly in addition to anomalies identified that are under cover. Such a survey will seek to map the distribution of sulphides and alteration successfully, and should also provide reliable and easily interpretable resistivity data for drill targeting. In relation to the breccia, high priority RC drill targets down to 150m are now being assessed for drilling in 2014 along with diamond drill targets to test the depth extent of the breccia. 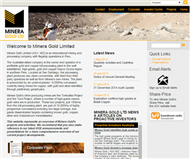 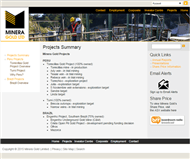 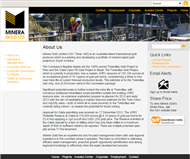 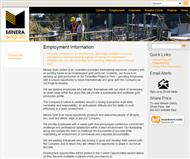