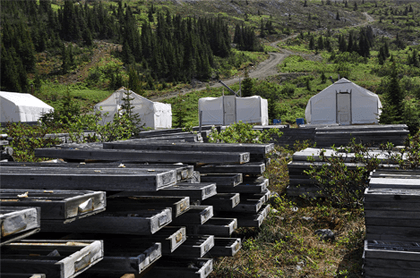 MinQuest Limited (ASX:MNQ) is a mineral exploration and project development company whose objective is to create wealth for shareholders through the acquisition of pre-production copper, copper-gold and multi-commodity base metal projects, completing exploration, scoping and feasibility studies and then capturing value for shareholders.

MinQuest pre-dominantly focus’s its exploration and project assessment activities on pre-production copper and copper-gold projects, which contain defined JORC compliant Mineral Resources. Through the application of leading edge geophysical techniques and new geological thinking, MinQuest aims to expand the currently defined Mineral Resources on its projects such that Scoping and Feasibility studies indicate that the projects will be economically viable as stand alone operations.

MinQuest will aim to maintain a portfolio of projects at differing levels of assessment, maximising news flow to the stock market.

While the majority of MinQuest’s project portfolio will be pre-production projects, the portfolio will contain one or two greenfield copper and copper-gold projects with the potential of deliver truly world-class mineral discoveries. A small proportion of the exploration budget will be spent each year on testing a quality target on the greenfield projects.

Since mid-2014 MinQuest has focused its activities in the Yukon Territory in Canada and in Australia, looking to capitalise on project opportunities in poorly explored geological terranes in these low sovereign risk countries.

MinQuest conducts its exploration and project assessment activities using socially and environmentally responsible methods. MinQuest aims to develop mutually beneficial relationships with all project stakeholders, particularly with the indigenous people’s in proximity to the companies projects.

MinQuest is headquartered in Brisbane, Australia and trades on the Australian Stock Exchange under the code MNQ.

The Fyre Lake Project consists of the Kona Deposit, a Volcanic Hosted Massive Sulphide (VHMS) deposit of late Devonian age. The Kona Deposit has been drill tested by 115 holes totaling 22,663m of diamond drilling. Most of this drilling was conducted along a 1,500-metre section from near its surface exposure in Kona Creek towards FL-005 Fyre Lake Historic Drillingthe southeast at depth. The drill-tested mineralization occurs within an area approximately 1,500 m long by 250 m wide. The deposit itself consists of two, parallel zones of mineralization known as Kona East and Kona West, separated by an inferred and apparent normal sense growth fault (Map FL-005).

The western lens of the Kona Deposit appears to be thickening at depth. One of the thickest and highest grade intersections recorded to date on the Fyre Lake Project was in hole 96-065, the most south-easterly hole to intersect the western lens of the Kona deposit. This intersection was 31.3m @ 2.3% Cu, 0.07% Co, 0.51g/t Au including 7m @ 6.0% Cu, 0.05% Co, 0.68g/t Au. The eastern lens of the Kona deposit may also thicken at depth in a similar way to the western lens. The eastern lens has two high grade sections open at depth, with the most south-easterly hole being 97-114 (Map FL-013). These thickened lenses of high-grade mineralisation represent very attractive exploration targets and cold potentially add significant tonnes to the currently defined mineral resource.

The Kona Deposit consists of two, parallel lenses referred to as Kona East and Kona West. These two lenses are separated from each other by a step fault, which was likely active during deposition of the Kona copper-gold mineralisation. Bounding the west side of the Kona western lens and the east side of the Kona eastern lens are two additional step-faults (Map FL-007). Very limited drilling has occurred beyond the faults bounding the mineralisation to the east and the west. These untested areas of potential extensions to the western and eastern lens of the Kona deposit, exhibit electromagnetic and magnetic anomalies similar to the electromagnetic and magnetic anomalies directly associated with the known Kona deposit (Map FL-013). If these anomalies are due to copper-gold mineralisation they would constitute entirely new lenses of mineralisation and potentially add significantly to the current Kona Mineral Resource.

The Kona East zone mineralization is 100 to 150 m wide, and consists of two massive to banded sulphide-bearing horizons (i.e. Upper and Lower Kona East) separated by 40 to 70 metres of chlorite schist (Map FL-012). These two horizons vary in thickness from 3m up to 16m and generally thickening slightly with depth. These horizons consist mainly of pyrite with lesser pyrrhotite and chalcopyrite; they also contain local lenses of massive magnetite and minor sphalerite.

The Marg project is located in the central Yukon, approximately 40km east of Keno City (MG-001). The property consists of 402 quartz mining claims covering over 8400 hectares adjacent to the Category A land of the Na-cho Nyak Dun First Nation (MG-002 ).

The Marg project consists of the main Marg deposit, a volcanogenic hosted massive sulphide (VHMS) deposit hosted in the metasedimentary and metavolcanic rocks of the Devono-Mississipian Earn Group. The project also contains an additional 15km long belt of the same felsic metavolcanic and metasedimentary rocks that host the Marg Deposit. Within this belt, soil geochemical sampling has outlined several very promising anomalies that have yet to be properly drill tested (MG-005, MG-006 and MG-007).

The Marg deposit consists of three continuous units that contain the majority of the total defined Mineral Resource. The deposit is strongly attenuated and contains an additional eight smaller stacked sulphide lenses. The deposit can be traced in the sub-surface for over 1400m along strike (MG-003). The deposit is open in both directions along strike and at depth (MG-004). The main economic mineral species are chalcopyrite, sphalerite and galena associated with pyrite occurring as massive to semi-massive lenses up to 20m thick (averaging 3m to 4m).

A simple evaluation of the deposit in terms of the mining potential shows that the higher grade resource is associated with the thicker zones and tends to be clustered in the central area of the deposit, plunging to the east. Of the 11.7Mt (at a 0.5% Cu cut-off), approximately 8.0Mt are thicker than 3.5m true thickness at grades greater than 2.0% CuEq. The deposit also dips from 45 degree to 70 degrees. These factors present a very positive scenario for the development of mining activities in the future.

MinQuest aims to explore the Marg project by drilling at depth and along strike with the intention to increase the size of the JORC compliant Mineral Resources at the Marg deposit. Significant exploration potential remains along the 15km strike length of favourable stratigraphy held within the extent of the projects tenements. The Jane Zone in particular represents a very attractive geochemical anomaly with mapping indicating the Marg VMS bearing horizons exists in the area (MG-005). MinQuest will test the Jane target, and other targets with the aim to add significantly to the currently defined Mineral Resource within a short distance from the main project site (<20km).

MinQuest also plans to initiate environmental and engineering studies for the purpose of updating a Scoping Study. The metallurgical information on the project is limited and work is required to confirm the potential recovery of the various economic elements. With this information, MinQuest will be able to update the Scoping Study and determine if a full Feasibility Study on the project is warranted.

The central region of the Yukon Territory, where the Marg is located, has fairly well developed infrastructure. The Bellekeno Silver Mine, held by Alexco Resources, is located 40km to the west and was operational until late 2013. Currently, their processing plant is on care and maintenance while the company develops further resources and waits for a recovery in the silver price. Recently, the Yukon government has approved the upgrade of the existing transmission line to Keno City from 68kV to a 138kV line. This upgrade is expected to be completed by the end of 2018. From Keno City and the Bellekeno Mine, the Marg project can be accessed by a 40km winter road. The exploration camp is still in place on the project and the majority of the infrastructure is ready for the re-commencement of exploration. A small landing strip for light planes exists on the project and several larger pieces of construction equipment are also on site. 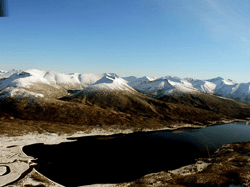 The Coober Pedy project consists of three tenements located near the town of Coober Pedy, South Australia. The focus of exploration has been the Cyclops target, located at the border between EL4891 and EL4892, approximately 150km South-West of Coober Pedy.

The Cyclops Target is thought to be:

An IOCG deposit equivalent in size to Prominent Hill emplaced at time of Hiltaba Event (~1595-1575 Ma).

Related to a dynamic environment at the paleo-continental margin, with variable stress regimes and variable fluid sources (mixing).

Associated with important ENE and NW-NNW structures linked to IOCG formation in the Gawler Craton.

MinQuest aim’s to enhance our project portfolio with projects, which meet the following criteria: 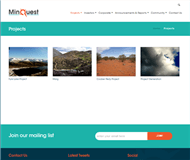 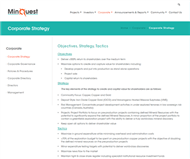 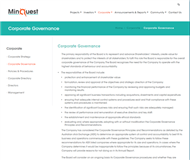 The General Overview, Services, Products and Projects information for this profile was last edited on 26 Apr 2016.