Rum Jungle Resources Ltd's strategic intent is to find, develop and operate fertiliser mineral, base metals and gold projects, located in close proximity to existing transport infrastructure, with a geographical focus on the Northern Territory, Australia.

Rum Jungle Resources Ltd is an ASX listed company that is transitioning from minerals explorer to a fertiliser minerals producer.  The Company’s strategic intent is to find, develop and operate phosphate and potash fertiliser minerals projects, located in proximity to existing transport infrastructure, with a geographical focus on the Northern Territory of Australia.

Over the last two years, the Company has discovered and evaluated significant phosphate mineralisation at the Barrow Creek 1 project located 200 km south east of Tennant Creek on the western side of the Georgina Basin.  Additionally, the company has reported the occurrence of plentiful, naturally occurring, potassium-rich brines at the Karinga Lakes south west of Alice Springs and has progressed exploration to define a JORC compliant sulfate of potash resource.

An off-market takeover of Central Australian Phosphate was completed in January 2014.  The key strategic objective of the takeover was to gain control of Central’s flagship Arganara phosphate exploration project which adjoins Barrow Creek 1 and is essentially the continuation of the same phosphate ore body.  This is now known as the Ammaroo Phosphate Project. The total JORC 2012 resource is 1.08 billion tonnes P205 at an average grade of 14% P2O5 using a 10% cut-off or 338 million tonnes at 18% P2O5 using a 15% P2O5 cut-off. This was released to the ASX on 24 March 2014 and has not changed since.

The potential to create a significant fertiliser minerals business in the Northern Territory is very well aligned with strategies to grow agricultural output in Australia, particularly the north and growth in Asia.  The future development of the Company’s projects could enable regional economic development and multi generational employment opportunities for local indigenous communities and population centres such as Alice Springs and Tennant Creek.

In 1871, a bullock wagon delivering barrels of rum to construction gangs became bogged in jungle terrain near the headwaters of the Finniss River, 65 km south of what is now Darwin, the capital of the Northern Territory. The crew unhooked the bullocks from the wagon and after becoming thirsty in the Top End heat, proceeded to drink the wagon-load of rum in a week-long party until they were rescued. The area then became known as "Rum Jungle".
A couple of years earlier, in 1869 the government surveyor George Goyder came across a green mineral in the area which was noted in his log but not identified. It was not until 1949, that a local prospector, Jack White rediscovered the green mineral which was identified as torbernite. Rum Jungle became the site of the first uranium discovery in the Northern Territory and Jack White was given a $50 000 reward. The Whites Mine was developed on the site and produced uranium, copper and lead between 1950 and 1958.
The company took its name from this first discovery of uranium. Originally called "Rum Jungle Uranium Ltd", the company changed its name to "Rum Jungle Resources Ltd" in December 2010.

The Ammaroo Phosphate Project is located in the highly prospective southern Georgina Basin, 240km southeast of Tennant Creek. The project area contains the former Barrow Creek 1 and Arganara deposits which have been combined and extended into a single JORC Resource. The project also contains, the Ammaroo South Resource and other named phosphate prospects and significant greenfields potential. 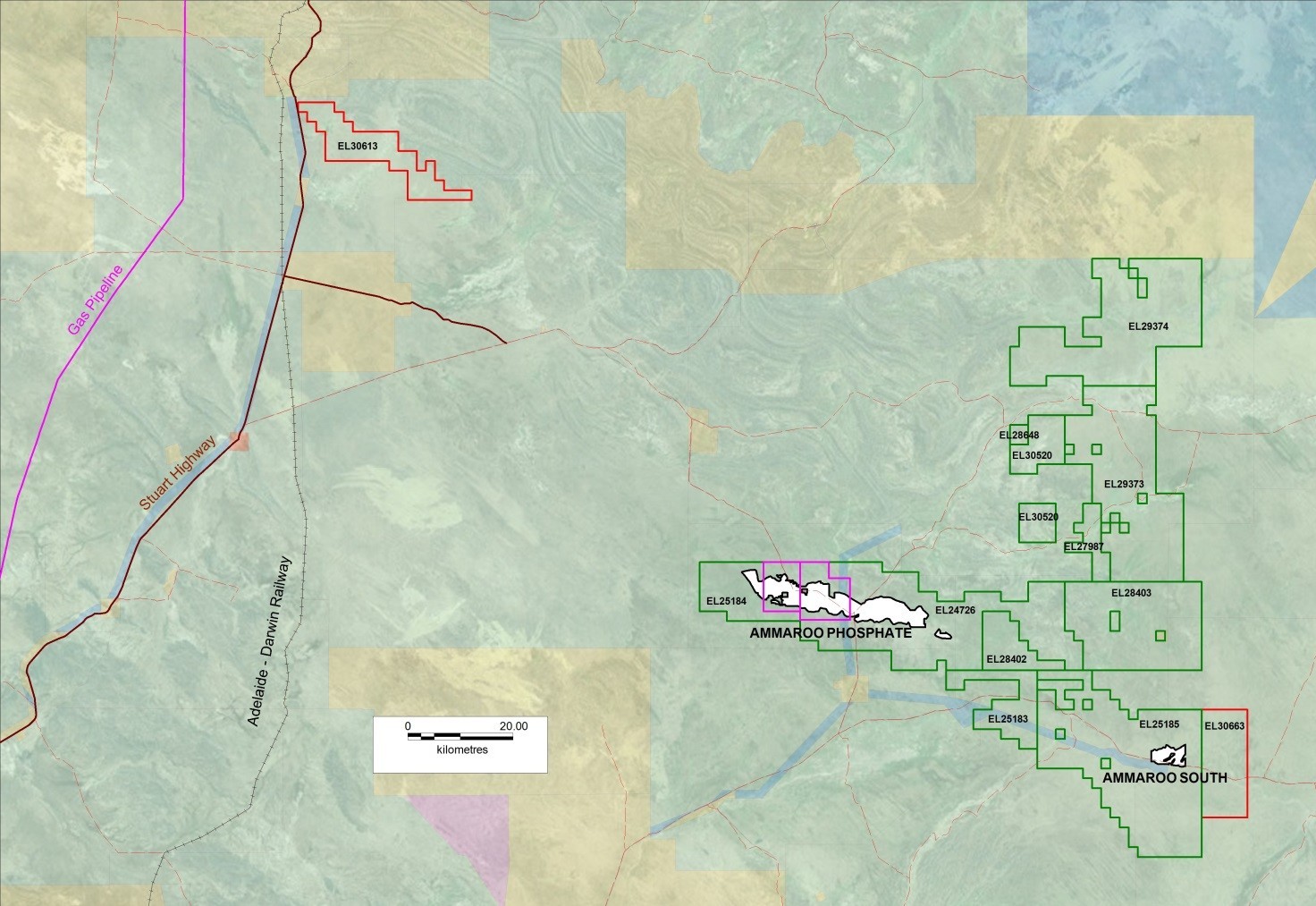 A rationalisation of the combined CEN, RUM and Territory Phosphate holdings is planned once the titles have been transferred into a single company name.

Rum Jungle Resources has submitted a Notice of Intent (NOI), which provides formal notification to the Northern Territory Government and other key stakeholders of RUM's intention to move towards the development of the Ammaroo Phosphate Project subject to teh successful completion of a potential Bankable Feasibility study and the securing of project financing in the future. The submission of the NOI triggers the environmental impact assessment process.

The NOI provides an overview of the proposed activities and potential development options, the environmental and social aspects associated with the project and proposed management strategies to be adopted in the development and operation of project. It is expected that the NOI will be reviewed by the Department of Mines and Energy, prior to forwarding the Environmental Protection Authority (EPA) for further assessment and the issuance of environmental impact guidelines that may lead to the requirement to submit an Environmental Impact Statement prior to approval in the future.

The Ammaroo Phosphate project pre-feasibility study has been completed and announced on 29th September 2014.

Rum Jungle Resources Ltd is pleased to announce the completion of the Ammaroo Phosphate Project Pre-feasibility study (PFS). The knowledge and understanding of the chemical and physical properties of the phosphate ore, technical mining, processing and transport logistics, regional phosphate markets and pricing, gained through the considerable amount of work conducted during the study, now provides a credible basis on which to conduct a formal process to secure joint venture partners and associated off take agreements. It is likely that partners and potential off take agreements will be required to finance the progress of one of the development options to a potential future bankable feasibility study

Four development cases have been studied to a PFS level (+/- 25% of capital and operating costs). These are:

Case A - A low capital, start-up phosphate rock export operation, 400,000 tpa (30% P2O5), leveraging high grade pockets of the resource, mechanical beneficiation and the use of existing road infrastructure and latent intermodal freight train capacity to move small volumes of product. This is potentially an option to start generating cash for the company while developing a larger scale project.

The Karinga Lakes Project covers a chain of dry salt lakes along the Lasseter Highway between Alice Springs and Uluru. It is part of the Central Australian Groundwater Discharge Zone. The Rum Jungle Resources JV is investigating the subsurface potassium- and magnesium-rich brines in the dry playa lakes. These brines could be used for the production of various fertiliser minerals. The water-soluble potassium-bearing mineral salts, loosely called "potash", include potassium sulfate (sulfate of potash, SOP which is usually a manufactured product) and potassium magnesium sulfate (schoenite or leonite). Schoenite can be obtained from the Karinga salt lake brines via solar evaporation in ponds and/or flotation processing. Other by-products are also being investigated. 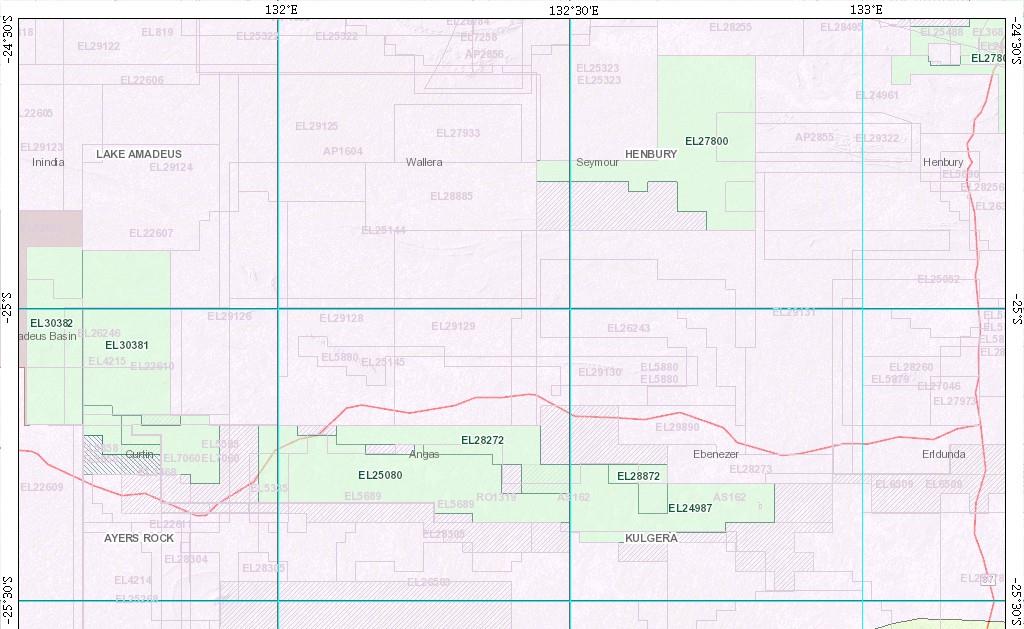 SOP and schoenite are utilised as high-end fertiliser products globally, as they have a lower salt index than other forms of potash and are often preferred in crops sensitive to chloride or susceptible to fertiliser burn. SOP and schoenite attract premium pricing in comparison to the more common varieties of potash. The Karinga Lakes Project is strategically well located adjacent to the Lasseter Highway and within close proximity of the Central Australian Railway line, providing access north to the port of Darwin and proximity to Asian markets and south to domestic markets. Moreover, Australia currently imports all of its potash requirements.

The Brunchilly Project consists of three contiguous phosphate ELs of 250 sub-blocks each, covering a total area of 2,439km2 east of Bootu Creek Manganese Mine near Tennant Creek. Depth to basement geophysical modelling, waterbores, soil sampling, and previous phosphate drilling all indicate prospectivity. Vale undertook wide-spaced drilling before withdrawing from the Northern Territory. Their best intercept based on their criteria of thickness x grade / depth was 24m at 3.16% P2O5 from 42m with indication that this should improve into Rum Jungle Resources’ tenement areas. Access is excellent; reconnaissance phosphate drilling could be undertaken at the intersections of the many tracks linking bores in the area. A waterbore study is in progress. 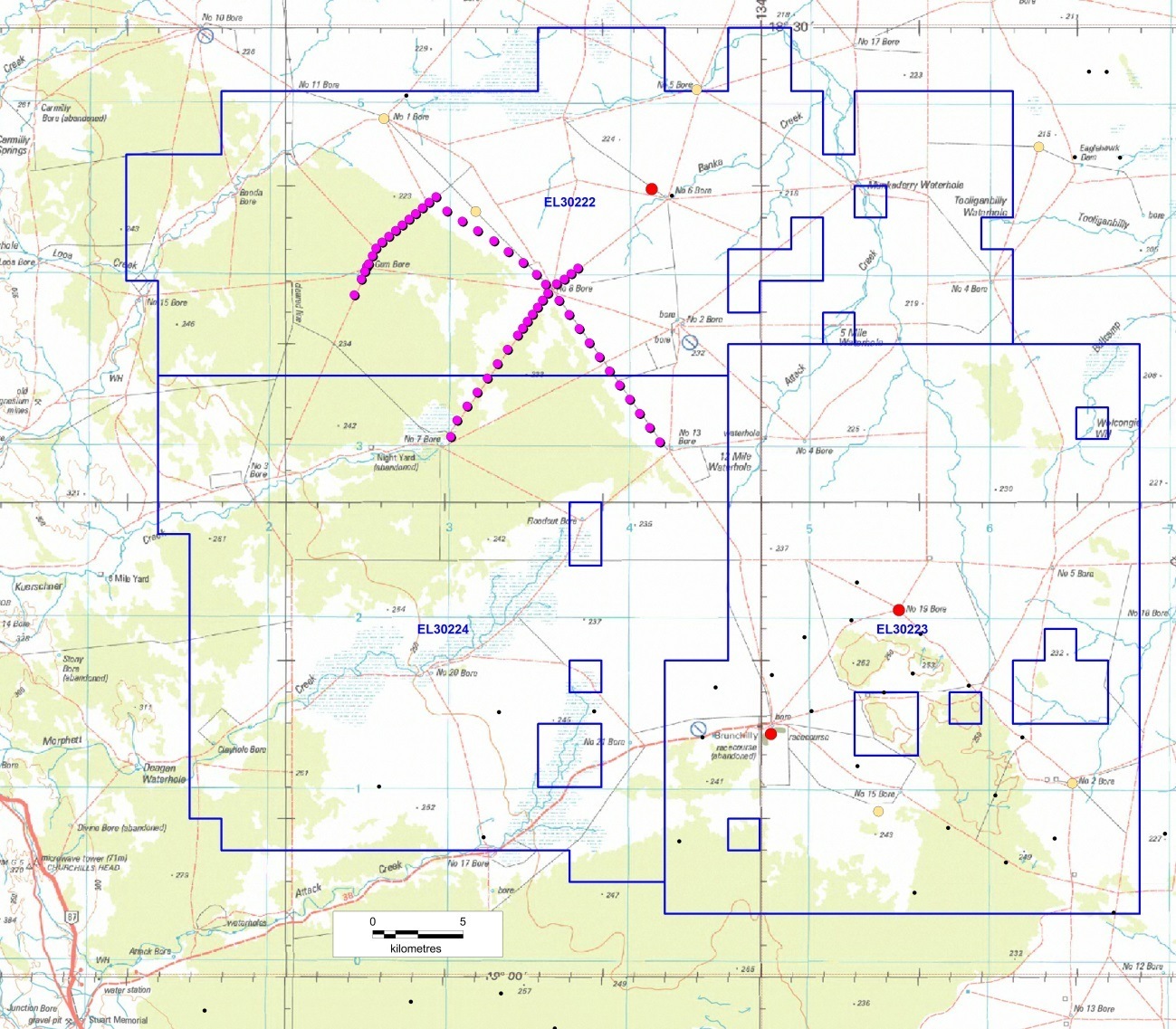 Brunchilly Project area showing waterbores highlighted as prospective for phosphate by NTGS (in Blue) and as highly prospective by CSIRO/Vale (red) and moderately prospective (orange). Minemakers' soil sampling in pink. Previous wide-spaced drilling by Vale is shown as black dots.

In mid 2013, a Joint Venture was signed with Toro Energy giving Rum Jungle Resources potash exploration rights to the southern part of Lake Mackay as held by Toro Energy Limited. 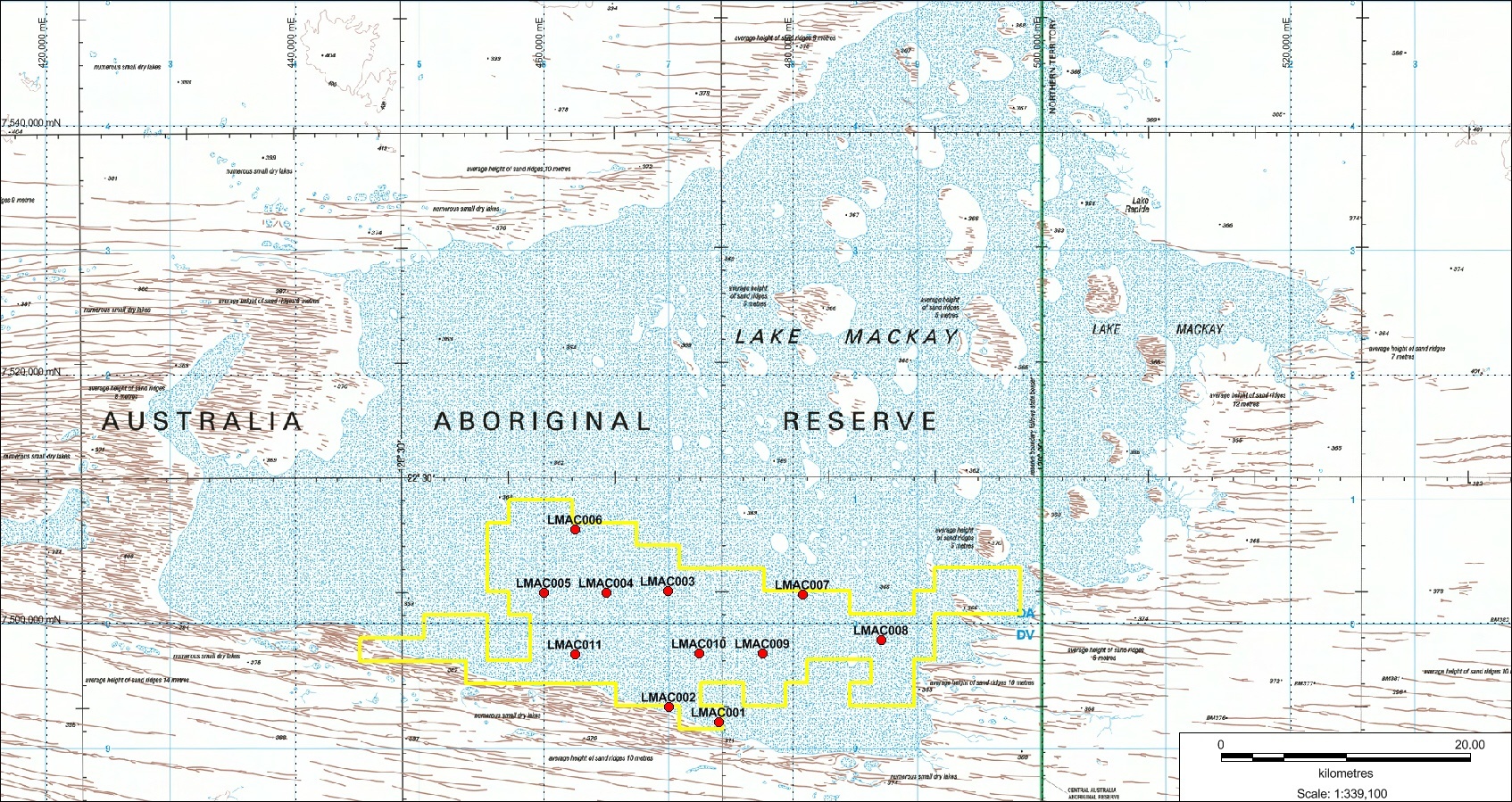 E69/2814 has recently been drilled. Drilling was carried out by a specially modified air core rig with standard 3 inch (75 mm) air core rods. The drill rig, air compressor, support pontoon, heli-cage and crew were moved around the lake with a Huey helicopter.

The deepest hole was drilled to 30 m, however sandstone basement was generally reached at around 20 m depth and holes ended at sandstone refusal. A positive outcome is that water was still brine quality at the top of the sandstone basement, indicating extra depth of brine may be expected upon deeper drilling with an RC rig if the sandstone is porous or fractured.

Sixteen holes were drilled on the lake surface with an average SWL of 0.25 m. 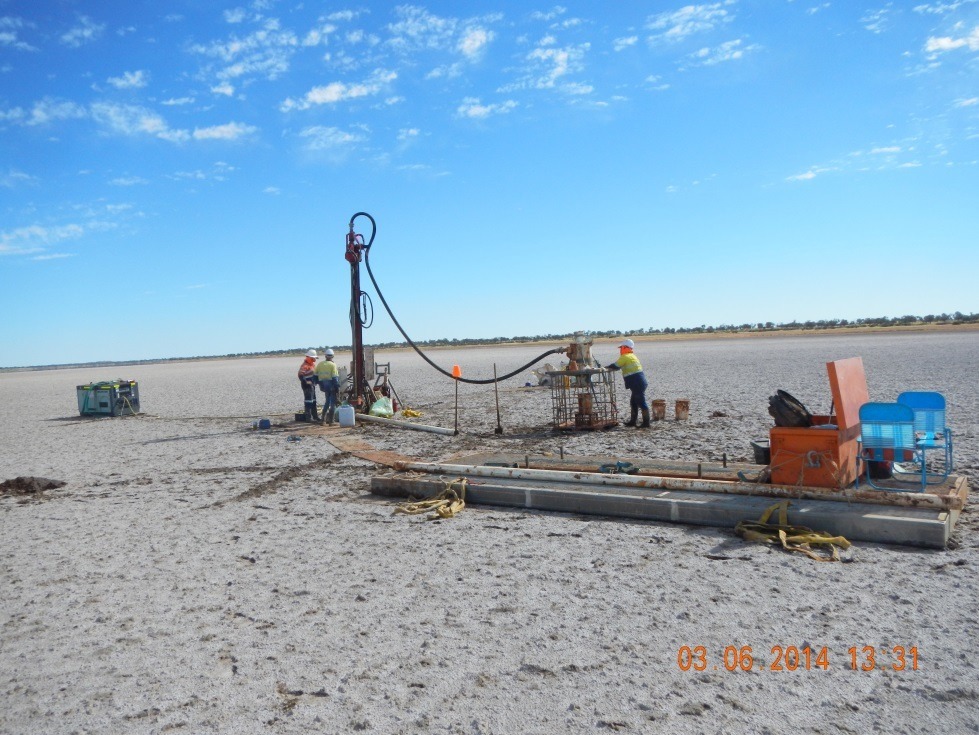 Six contiguous ELs applications cover all of Lake Amadeus in the NT. The applications include 1,010 km2 of lake area along a 130 km length. The eastern boundary is contiguous with the Karinga Lakes Project and corresponds to the ALRA/pastoral boundary. 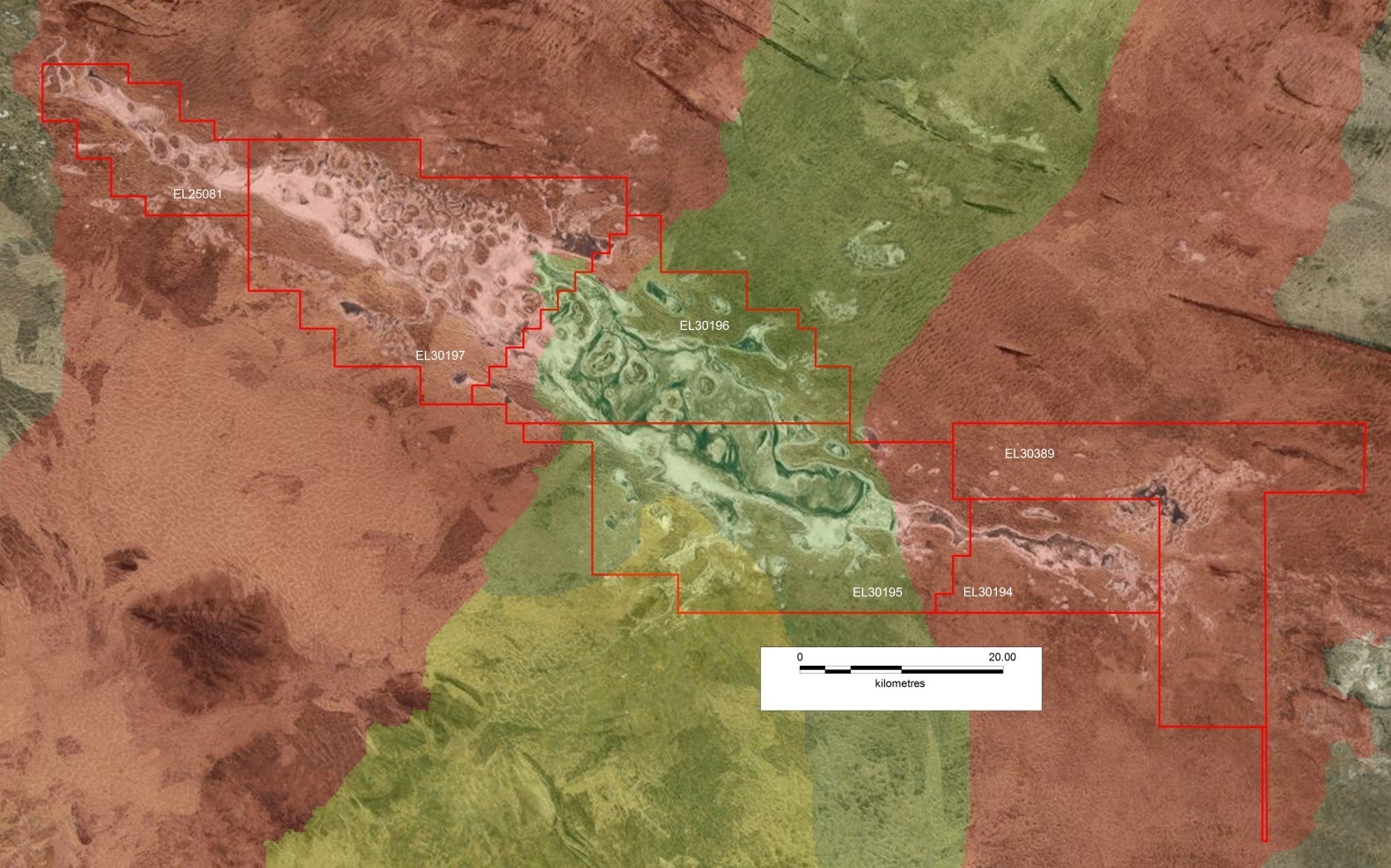 A series of three granted titles of 2,718 km2 cover the entire Lake Frome in South Australia. The lake has previously been explored for alkali evaporites and a single hole was drilled targeting lithium. There is very little data on the potash prospectivity, but GA rated the southwest as the most prospective. 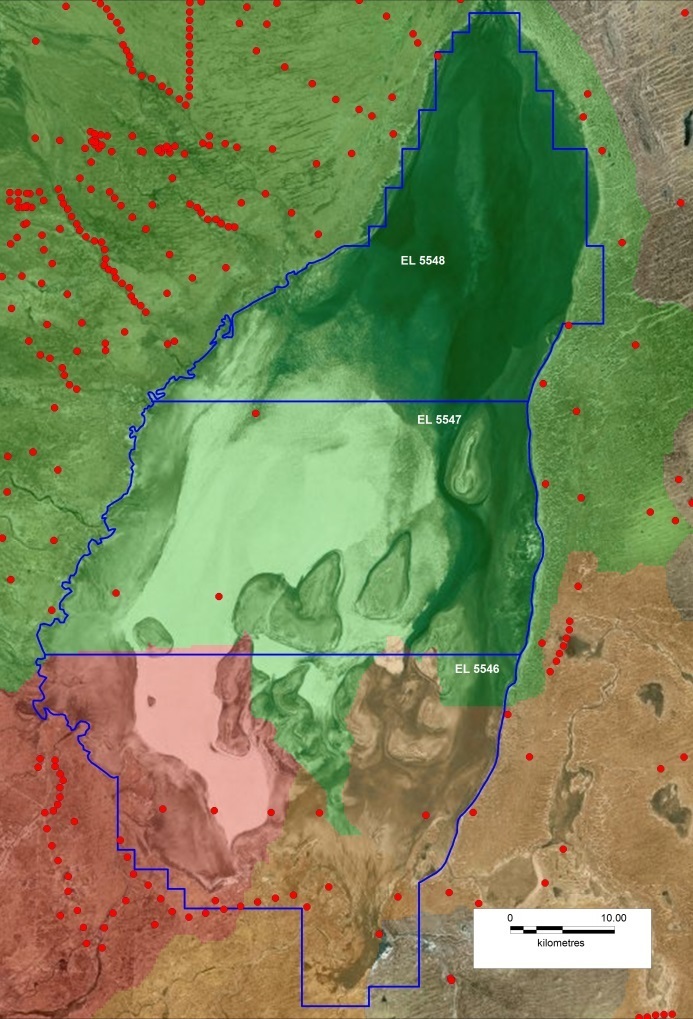 Lake Frome Tenement Areas. The catchments shown with a red tint are rated by GA as most prospective for potassium. Historic drillholes are shown as red dots. There has been very little drilling on the lake itself.

Three titles across WA and NT cover all of Lake MacDonald which straddles the border. It is a strategic holding considered prospective for brine potash and possibly lithium. The titles are less than 100km from the producing Surprise petroleum field. E69/3290 has been granted. 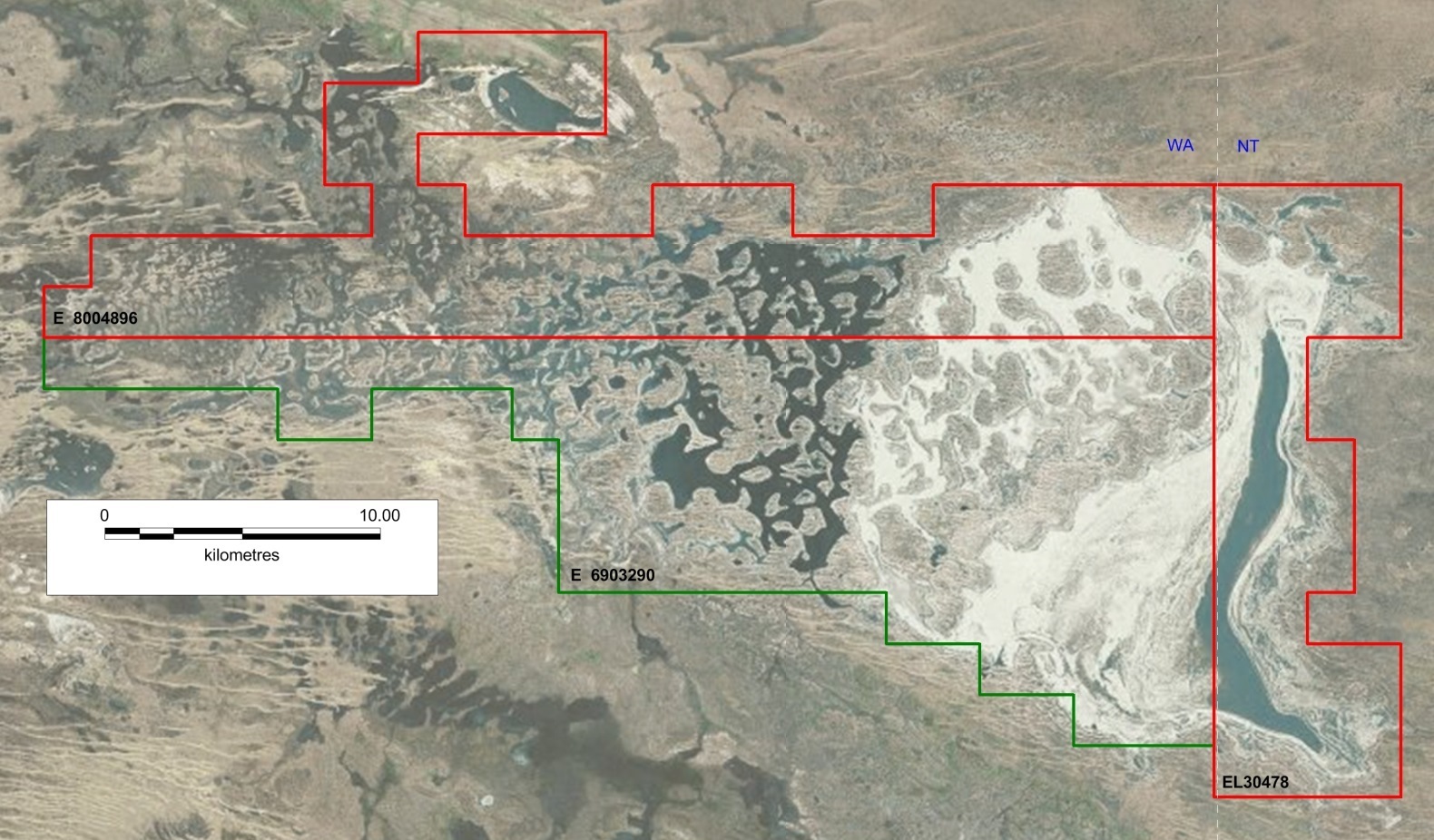 Rum Jungle Resources has four granted titles that cover a significant portion of Lake Torrens in South Australia which shows potential for Potassium. Lake Torrens Granted Titles. The catchments shown with a red tint are rated by GA as most prospective for potassium. Historic drillholes are shown as red dots.

Patanella (formerly also called Lucy Creek) on EL 24716 is a rock phosphate deposit on the opposite side of the Georgina Basin from Rum Jungle Resources' flagship Northern Territory Ammaroo Resource. Patanella is 265 km northeast of Alice Springs, 155 km southwest of the Ammaroo Resource and 100 km south-southeast of Ammaroo South.
Rum Jungle Resources is pleased to announce an independently assessed Exploration Target for its Patanella Phosphate Prospect of approximately 50 Mt and 100 Mt at 10% to 17% P2O5 at a cut-off grade of 5% P2O5 or approximately 20 Mt to 50 Mt at 15% to 20% P2O5 at a cut-off grade of 10% P2O5. These estimates are based on broad spaced drilling information of uncertain reliability. The potential quantities and grades are conceptual in nature. There has been insufficient exploration to estimate a Mineral Resource and it is uncertain that future exploration will result in estimation of a Mineral Resource.
Rum Jungle Resources acquired the Patanella Prospect as a result of the take-over of Central Australian Phosphate. While Patanella adds to Rum Jungle Resources' mature phosphate exploration targets, this estimation was undertaken mainly as a necessary prerequisite to applying for more secure tenure over this area. Rum Jungle Resources is currently evaluating if and when any further drilling will be undertaken at Patanella. 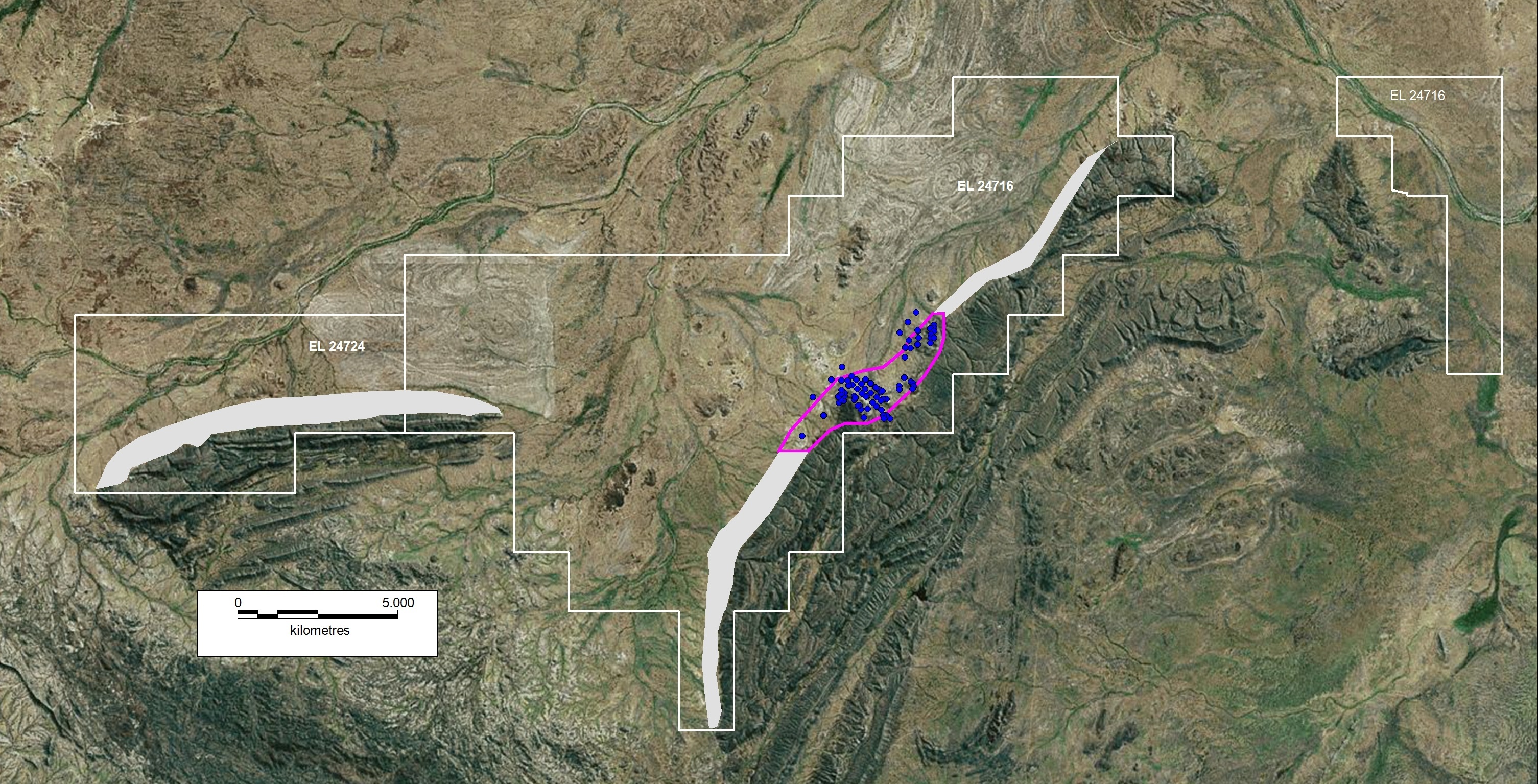 CEN Patanella phosphate titles, showing Patanella Prospect with the drillholes, the defined exploration target outlined in pink and the prospective interval in white. 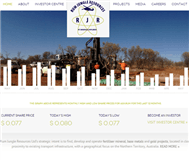 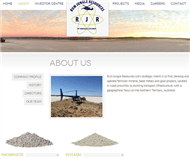 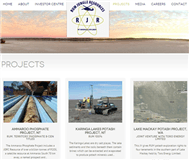 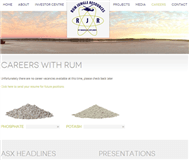