ASX-listed WHL Energy Ltd (ASX: WHN) is an emerging oil and gas company with valuable assets in Australia and the East African region:

The Company plans to create shareholder value by: 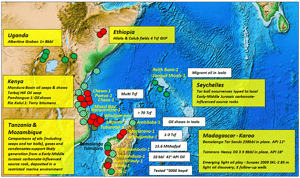 WHL Energy has made strong progress with its “flagship” Seychelles offshore exploration project since acquiring the asset in 2010.

2014 has seen a major acceleration in the development of the asset with the signing of a farm-out agreement with A$3.2 billion plus Market Cap Ophir Energy plc - one of the most successful explorers in East and West Africa.

An initial 1528km2 3D seismic survey was successfully completed in July 2014 on time and within budget. This was the first 3D survey ever acquired over WHL Energy’s Seychelles exploration asset and only the third ever acquired in the waters off the coast of the Republic of Seychelles.

The Junon 3D seismic survey was designed to mature a number of those prospects for drilling including Junon South, Junon East and Junon Central.

An initial fast track processed data set was delivered in September 2014 and a Pre-Stack Depth Migration processed volume is expected to be completed by mid-year 2015.

The 3D seismic data acquired in this survey is expected to provide a markedly enhanced definition of the Junon prospects from the 2D seismic they acquired when they first took up their Seychelles exploration permits.

Prior to the successful completion of the Ophir farm-out, WHL Energy’s exploration team had completed some truly significant work in upgrading the prospectivity of their Seychelles project and of the Seychelles itself.

The Seychelles area has geological affinities with the East Africa margin, which has become a focus of industry exploration attention due to the recent discovery of world class gas resources (100 Tcf) offshore Mozambique and Tanzania, and also Madagascar which hosts multi-billion barrel heavy oil deposits.

The company’s extensive geological and geophysical studies indicate that their Seychelles acreage is oil prone. A new basin, the Correira Basin, is mapped in the east of the acreage on 2D seismic data acquired in 2010/11 which provides deeper geological imaging for the first time. This basin is interpreted to contain oil prone potential source rocks which have a burial history that is favourable for oil generation and expulsion.

A portfolio of some 20 exploration prospects and leads is mapped in WHL Energy’s areas in a variety of play types. In the east, the Junon structures are interpreted to be a focus for oil charge from the Corriera basin and are a priority to mature for drilling. The recently acquired 3D seismic is planned to cover these structures. In the west, the giant Beau Vallon structure, with billion barrel oil potential is mapped which will also be subject to further seismic acquisition. In addition to Junon and Beau Vallon, significant follow on potential is mapped in Junon North area (Junon NW, NE and Central) and the wider Beau Vallon area. A stratigraphic subcrop play is present on the flank of the Junon South structure (Creole).

WHL Energy’s Seychelles acreage offers a unique frontier exploration opportunity with a regional scale footprint and the associated high potential. The Company has been instrumental in developing this project from its embryonic stages to the point where a high quality industry participant has elected to invest in the project by funding 3D seismic acquisition and optional drilling. 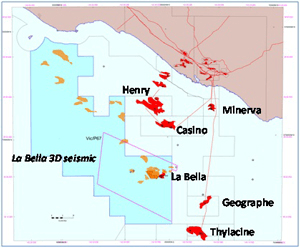 WHL Energy targeted VIC/P67 during the 2011 Australian Offshore Petroleum Exploration Acreage Release because of the known gas resource in the La Bella field, the additional exploration potential of several nearby leads and an identified window of opportunity in the Australian East Coast gas market. WHL Energy was awarded the Permit in May 2012.

WHL Energy’s objective in VIC/P67 is to discover and commercialise the potential gas resources in VIC/P67, including the undeveloped La Bella gas discovery. The eastern Australia domestic gas market is undergoing a fundamental shift with demand for gas from the Gladstone LNG projects in Queensland expected to provide a major uplift in prices.

WHL Energy has made tremendous progress with this exciting asset. Data from the 928 km² “La Bella” 3D seismic programme acquired in late 2013 has increased the company’s confidence that it is well placed to commercialise this very valuable and well located project.

The La Bella 3D seismic data has defined a portfolio of 14 prospects within VIC/P67 containing total best estimate Prospective Resources of 1044 bcf of gas and 31.2 MMbbls of condensate and LPGs. Low geological risk ratings have been assigned to a group of 4 prospects known as Mylius, Mylius West, Ferrier and South Ferrier that are located immediately west of the La Bella gas and condensate field on the Ferrier Terrace. These prospects are characterised by structurally conformable amplitude anomalies on the La Bella 3D seismic data. WHL Energy believes that these features, along with the La Bella field, could form a core gas development in VIC/P67 with further confirmation by successful exploration drilling.

In addition to the Ferrier Terrace amplitude anomalies there are a number of higher potential prospects. The Lowlander is the most attractive of these, with a low – moderate risk profile, along with the Alexandra structure.

The block is surrounded by producing infra-structure which offers several potential commercialisation options for La Bella and any future gas discoveries. The exploration portfolio defined by the La Bella 3D also provides the possibility of an independent project.

The project is well positioned to capture anticipated growth in gas demand in Eastern Australia arising from the growing impact of the expansion of LNG projects in Queensland. Many analysts forecast that east coast gas pricing will ultimately move towards LNG netback pricing as export demand increases.

The Company holds 33.33% equity in exploration permit WA-460-P, in the offshore Southern Carnarvon Basin, which contains an extension of the very large Palta Prospect.

A Shell led Joint Venture drilled the Palta-1 well in the adjacent block in late 2013, which was subsequently relinquished in February 2014.

An appplication to surrender WA-460-P was made to the National Offshore Petroleum Titles Administrator (NOPTA). NOPTA has notified the Company of its intention to cancel the permit. WHL Energy has applied for a Good Standing Arrangement in relation to its share of the WA-460-P committed work program. 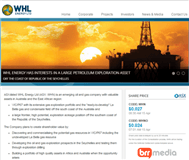 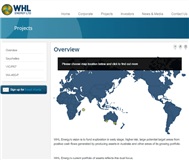 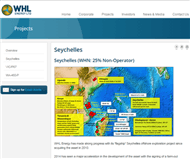 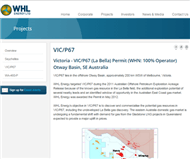