Nevada Iron Ltd (ASX Code: NVI, TSX Code: NVR) is an Australian based resource company focused on the development of the Buena Vista Iron Project, which is located in Nevada in the United States.

The project has established JORC magnetite resources and reserves from which an average of 1.75 million wet tonnes per year of high grade magnetite concentrate are projected to be produced for an initial mine life of 10 years. 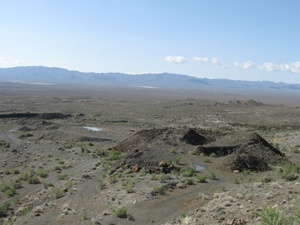 Buena Vista is a magnetite iron deposit that was discovered in 1898, intermittently mined in the 1950s and 1960s and most recently explored by US Steel in the period 1961-1979 as a potential feed for a US based smelting plant. At least 320 diamond holes have been completed over the whole property, together with extensive metallurgical test work and mining studies.

As part of a their studies, US Steel outlined substantial pre-JORC reserves and resources within the West, South Central, Iron Point, Southwest and Section 5 deposits. These deposits within the historic pit designs had a combined waste to ore ratio of less than one.

All of the current JORC resources and reserves at the Buena Vista project are on private land under patented mining claims. This is an important consideration within the United States and allows Nevada Iron to fast track development through accelerated approvals.

In addition, Buena Vista is located approximately 40 kilometres from the Union Pacific rail line that connects to port facilities at Sacramento, Stockton, Richmond and San Francisco.

In January 2010 Nevada Iron entered into an option to purchase a 100% equity in the project and in June 2011 this option was exercised.

Buena VistaThe purchase price of US$6,000,000 was satisfied by the payment of US$3,000,000 in cash and by the issue of fully paid ordinary shares in the capital of Nevada Iron.

Nevada Iron LLC ("LLC"), a 100% owned subsidiary of Nevada Iron, now owns 100% of the Project and the vendor (Kircher Mine Development LLC) retains a 20% beneficial and net profits interest (“NPI”). 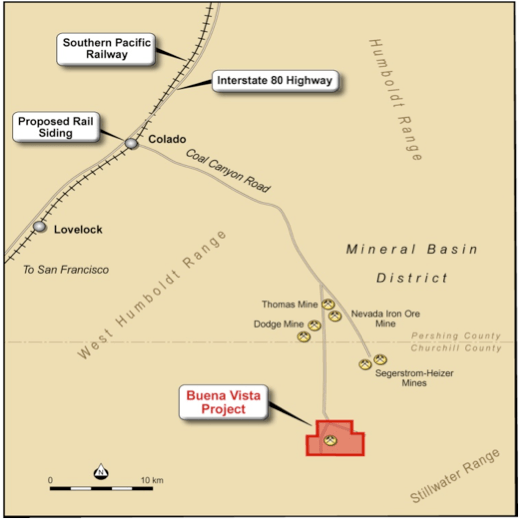 The Buena Vista project is located in western Nevada, around 450km northeast of San Francisco. Access to the project area is via Interstate 80 to Lovelock (around 107km east of Reno) and then 38km from Lovelock via Interstate 80 and Coal Canyon road, which is a bitumen road for the majority of the distance.

A rail head is located at Lovelock and the Southern Pacific railway that parallels' Interstate 80 connects to four ports in the San Francisco region.

It is proposed to construct a rail siding at Colado which is at the junction of Coal Canyon Road and Interstate 80. Concentrate will be transported from the mine site to this siding by slurry pipe, dewatered and then trained to the ports.

Grid power is available within 10 km of the site and it is proposed to utilise grid power for all of the proposed operations energy requirements.

Sufficient water has been sourced from ground water aquifers located in the North Carson Sink, 2 miles southwest of the mine site. A total of five wells will be drilled to provide all the water requirements at the mine site.

An application was made to the Nevada Department of Conservation and Natural Resources (Division of Water Resources) for 1,750 acre feet per year, equivalent to 2,159,000 m3 per year, which has been granted for the life of the mine. The water will be pumped some 3.8 km from the bore field to the beneficiation plant. 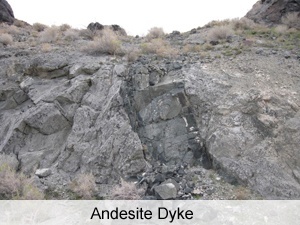 The general geology of the Buena Vista area consists of basaltic volcanic rocks of Jurassic age that are intruded by a partially scapolitised gabbroic complex. Tertiary deposits are faulted against the Jurassic rocks in the eastern part of the area.

Away from the hills of volcanic rock, much of the older geology is obscured by surficial deposits.

The principal magnetite deposits in the Mineral Basin District occur in a large body of rock made up of the assemblage scapolite-brown hornblende-clinopyroxene-calcite-magnetite, which can contain up to 90% scapolite. The contact of the scapolite rock with the overlying volcanic rock is poorly exposed and might indicate that the scapolite rock intrudes the volcanic rocks.

Leucocratic dykes cut the scapolitic gabbro in the vicinity of the Buena Vista workings. The majority of these dykes trend northwest are steeply dipping and commonly occur in swarms. They tend to be narrow, only 1 metre or so in width, but can often be traced for distances of up to 300 metres.

Geology - Scapolitised DykeThe proposed mining area around the West ore body occurs in the contact zone between the intrusive diorite-gabbro and overlying basalt-andesite. The intrusive rocks and adjacent meta-volcanics have been highly scapolitised and, in the vicinity of the magnetite rich zones, chloritised. Post-mineralisation dykes cut both the diorite-gabbro and the meta-volcanic rocks. 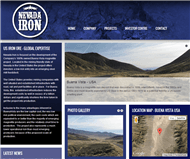 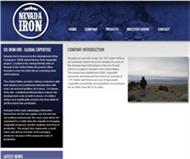 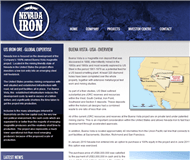 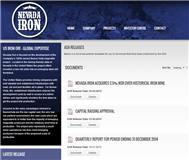 The General Overview, Services, Products and Projects information for this profile was last edited on 26 Mar 2015.