The main focus of Regalpoint Resources (“Regalpoint”) is uranium exploration and mining in Australia.

The Company currently has rights to a number of Exploration licences at various stages of the granting process. The licences are spread over the States of Western Australia, South Australia, Queensland and the Northern Territory.

These licences are the product of an intensive and long term study conducted by the Centre for Exploration Targeting (CET) (a joint venture between the University of Western Australia and Curtin University of Technology).

The Centre for Exploration Targeting was established by the University of Western Australia, Curtin University of Technology and the exploration industry, with key funding support from the Government of Western Australia through the Centres of Excellence in Science and Innovation Program. With over 50 affiliated scientists and postgraduate students, the CET is the largest economic geology research group in the world that is focussed on mineral exploration and applied research towards more efficient targeting of mineral resources. The CET, a finalist in the 2006 Australian Mining Prospect Explorer of the Year Award, is recognised within academia and industry for its world-class fundamental and applied research and provision of knowledge and practical tools to the mining and exploration industries. 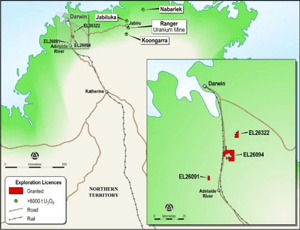 The Rum Jungle, Cameron Downs, Harrison Dam and Adelaide River Projects are situated in the Pine Creek Region, Northern Territory, within a 30km radius of Batchelor, near Litchfield National Park and approximately 70km south-southwest of Darwin. Between 1954 and 1971 the Rum Jungle uranium field produced more than 6,000 t U3O8.

The Archaean Rum Jungle Complex comprises schist, orthogneiss, banded iron formation and granite, and is exposed in two domal inliers. The Rum Jungle Complex is unconformably overlain by a sedimentary succession comprising the Manton, Mount Partridge, South Alligator and Finniss River Groups. Dolerite and gabbro sills and plugs of the Zamu Dolerite intruded these sediments. Multiple folding and faulting events affected the region from 1880 to 1760 Ma. Early northwest-directed thrusts were overprinted by tight to isoclinal north-trending folds, accompanied by upper greenschist facies metamorphism. Open folding and kinking was the distal expression of granite emplacement to the east and southeast.

RGU has undertaken exploration work across the project area, including drilling, sampling and geophysical surveys, in addition to previous drilling undertaken by Nicron Resources (Nicron) and Normandy. Nicron drilled 24 RC holes over a gold soil anomaly now known as the Highlander Prospect, and Normandy subsequently took over the area and interpreted the anomaly as a stratabound zone of vein type gold mineralisation over a strike length of 4.5km. The mineralisation is interpreted as a sulphide Au-Quartz vein system in the boundary vicinity of the Wildman Siltstone and underlying Whites Formation. The structure in the area is dominated by a series of north-south striking anticlines.

The highlander gold prospect is a historical gold anomaly located within EL26094, east of Batchelor. Regalpoint undertook a program of costean excavation, mapping and sampling and an initial RC drill program (1,540m) to test the strike and depth of mineralisation and to verify the historical drill results. Historical shallow RC drilling and highlander returned assays up to 9m @ 1.88 g/t and 3m @ 2.90 g/t Au.

These Assays highlight the potential to identify primary high grade shoots within this zone.

Drilling has now defined a coherent zone of anomalous gold mineralisation at the thrust fault contact of the Whites Formation and overlying Wildman Siltstone. The Flaming Fury-Highlander trend has numerous artisanal costeans along its potential northern extension with regional mapping and rock chip sampling indicating that the Au - As anomalism continues alonf this northern trend and in other areas of the tenement.

Regalpoint will undertake further drilling to target higher grade pods, and the norther extension to the highlander trend.

The Company's core Paroo Range Project (EPM16923 and EPM16980) is adjacent to the Paladin/Summit Valhalla project in Queensland. An application to extend the term of EPM16923 was granted with a new expiry date of 17 December 2015. RGU is targeting structurally controlled metasomatic uranium mineralisation that occurs within albitised meta-basalts with breccia zones developed through the quartz-haematite-carbonate alteration zone. This mineralisation style is analogous to the nearby Valhalla and Skal deposits and to the Anderson Lode deposit, which the Company believes has strong potential to host economic mineralisation.

An airborne radiometric survey undertaken by GPX Airborne Surveys over the tenement area during Dec 2010/ Jan 2011 identified a significant radiometric anomaly (Skevi) in the Eastern Creek Volcanics and several other smaller anomalies. Drilling was undertaken during June 2012 and identified a mineralised fault or shear system trending made up of several mineralised fault zones spaced 6 to 10m apart over a length 500m.

A followup drilling program was completed in November 2013 with the aim to demonstrate continuity and depth extent of the mineralisaed zone.

The project tenements cover outcropping of the Eastern Creek Volcanic system, the main host lithology for known mineralisation in the Mt Isa district. This system hosts the significant Vallhalla and Skal uranium resources, which are adjacent to the Company's tenement holdings.

An airborne radiometric survey was undertaken over the tenement area in late 2010/ early 2011. The survey identified a significant radiometric anomaly (Skevi) in the Eastern Creek Volcanics and several other smaller anomalies were also identified.

The drilling identified a mineralised shear system trending at 010° made up of several mineralised fault zones spaced 6 to 10m apart over a length 500m. 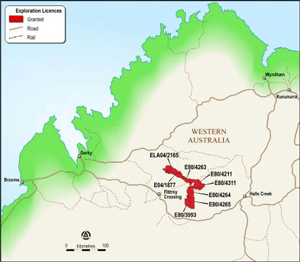 The Company holds two granted tenements (E80/4264 and E80/4311) in the King Leopold project area covering an area of 400 square kilometres. Based on the low order of results from E80/4211 and the lack of encouragement from on-ground inspection this tenement was surrendered on 31 October 2013.

The King Leopold project is located in the Kimberley region, approximately 65 km northeast of Fitzroy Crossing and 120 km west-northwest of Halls Creek.

The project area lies over the unconformity between the Hooper complex of the King Leopold Orogen, a Lower Proterozoic mobile zone, and the southern margin of the Kimberley Basin, a Middle Proterozoic continental basin lying unconformably over the rocks of the Kings Leopold and Halls Creek Orogens. In places, this unconformity has acted as an overthrust fault surface of the Kimberley Basin rocks thrust over the Hooper Complex.

The prospectivity for unconformity-related and sandstone hosted uranium mineralisation in the project area is based on the three essential ingredients (i) the high radiometric response from the granites and metasediments of the Hooper Complex, (ii) the unconformity and structural complexities between the underlying Hooper Complex and overlying platform sediments, and (iii) potential trap-sites in carbonaceous units of the lower Hooper Complex or permeable basal sediments of the overlying Kimberley Basin.

The potential for vein-style uranium mineralisation associated with the volcanic tuffs in metasedimentary sequences of the Whitewater Volcanics is also a target for exploration.

The Juno and Jupiter Prospects (E80/4311) lie on a major north-south trending regional fault filled with quartz breccia and is essentially a radiometric hotspot within the fault system, which is otherwise devoid of radioactivity. The Juno hotspot coincides with a saddle in the otherwise prominent ridge formed by the quartz breccia. It may be a zone of clay alteration within the otherwise silica-rich fault.

The geochemistry of the single rock grab sample taken at Juno suggests a hydrothermal origin with high Mg suggesting that the associated clays are chloritic, a common feature of unconformity style U mineralisation. The breccia is clearly hydrothermal. The fault zone could have acted as a remobilisation pathway and trap site for uranium weathered from the surrounding Whitewater Volcanics.

Anomaly L48 (E80/4264) appears to due to a superficial enrichment of uranium due to lateritisation processes, involving the leaching of uranium form high U-background siltstones during weathering and deposition at the contact with underlying sandstones.

A review of the earlier work will form a background to planned future drilling of the Jupiter, Juno and L48 Uranium Prospects. The current total area of the project is approximately 254 square kilometres.

The information in this report that relates to Exploration Results, Exploration Targets, Mineral Resources or Ore Reserves is based on information compiled by Malcolm Castle, who is a Member of the Australasian Institute of Mining and Metallurgy (“AusIMM”). Mr Castle is a consultant geologist with Agricola Mining Consultants Pty Ltd. He has sufficient experience relevant to the style of mineralisation and type of deposits under consideration and to the activity which he is undertaking to qualify as a Competent Person as defined in the 2012 edition of the “Australasian Code for Reporting of Exploration Results, Mineral Resources and Ore Reserves”. Mr Castle consents to the inclusion in this report of the matters based on his information in the form and context in which it appears. 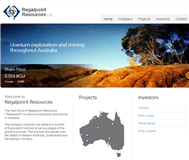 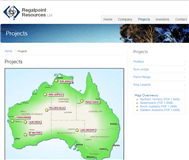 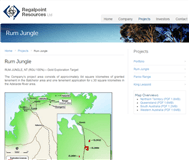