Al Hariqah project is an advanced stage exploration asset that has been substantially de-risked by exploration work completed to date. Future exploration and drilling programs are planned to establish an initial Mineral Resource estimate and to demonstrate considerable upside to the south and at depth.

The Al Hariqah Gold Project (Project) is a near-surface gold deposit located 130km northwest of Sana'a, Yemen. The Project is 100% owned by Cantex Mine Development Corporation (Cantex) which is listed on the TSX Venture Exchange and headquartered in British Columbia, Canada.

The Project comprises a granted exploration licence covering an area of approximately 957 square kilometres and is valid until 16 January 2016 with the option for two further 4 year extensions (providing 50% area relinquishments are carried out at the first extension).

WCP has until 10 February 2014 to exercise its option to farm-in to the Project. Upon exercise, and by meeting a series of expenditure commitments, WCP will be able to progressively earn up to a 70% interest in the Project.

During the quarter, six holes were drilled at the Project for a total of 933m. The current drilling program comprises core diamond drilling (DD) utilising two drill rigs, including a small scale core rig and slightly larger dual core/percussion rig.

The key objectives of the current drilling campaign are to test extensions to the gold mineralisation south of the previously drilled northern 1km section (of the total 4km of strike) where only limited drilling has previously been conducted and to confirm previous results from drilling in the northern 1km section where significant previous drilling has encountered significant mineralisation.

Further drilling is currently being planned to test 2km of the remaining 3km of underexplored strike directly to the south of the previously drilled northern section (refer Figure 3).

Since WCP entered into the option agreement with Cantex to farm-in to the project in December 2011, 30 holes for 4,568m of drilling have been completed at the Project.

Following the appointment of an in-country Exploration Manager in April 2013, WCP has now established a procedure whereby drill core samples (being half of the BQ diameter core) are crushed and pulverised at a local sample preparation facility operated by the Geological Survey and Mineral Resources Board of Yemen (GSMRB) and then the processed samples are exported for fire assaying in Canada by the ALS Vancouver laboratory. This has improved assay turnaround times. 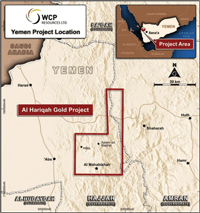 Prior to the current drilling program, 162 holes totalling 18,127m had been drilled at the Project, comprising 4,145m of reverse circulation (RC) drilling, 10,192m of percussion rotary air blast (RAB) drilling and 3,790m of DD.

A selection of the five best historic intercepts include:

The drilling completed at the Project to-date has defined a broad zone of gold mineralisation which is approximately 4km in length, up to 500m wide, and extends to at least 150 metres depth with several deep holes ending in mineralisation.

Previously, drilling has concentrated on the northern 1km of strike where numerous mineralised intercepts have been returned. The southern 3km of strike has only been subjected to sporadic drilling on the eastern side which did return gold mineralisation that warrants follow up drilling. The deposit is open along strike to the south, across strike and at depth.

There has been no resource estimate prepared for the Al Hariqah Project to date, however WCP believes the Project has the potential to host a large scale gold project.

Results from the ongoing drilling program, together with the extensive previous drilling, will provide a solid base for an updated geological model for the Al Hariqah Project and the Company will look to prepare an initial Mineral Resource estimate in accordance with the JORC Code during 2014. 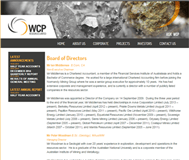 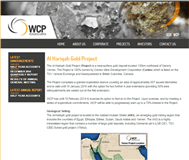